Tony was born in Wrexham in October 1924, the son of an army soldier. His father, a World War I veteran who had fought at the Somme, ended up as a Sgt Major PTI. Tony moved with the family several times until his father left the army when Tony was around 8 years old. Shortly after leaving the army his father became a PT Instructor at Repton Public School in Derbyshire. Tony completed the rest of his education at the village school, and became an apprentice turner and fitter in Burton-on-Trent.

He initially volunteered for RAF aircrew but was told there was a two year waiting list and subsequently enlisted at Colchester in late 1942 joining the Ox and Bucks Light Infantry. The following year he volunteered for the Paras and qualified as a parachutist on 20 December 1943. After interview by Major ‘Boy’ Wilson he was selected to join the 21st Independent Parachute Pathfinder Company. He joined them at Bardney in Lincolnshire in early 1944, shortly after it had returned to the UK from Italy.

Tony is best known for his role as a sniper during Operation Market Garden when he held a position in 34, Pieterbergseweg, Oosterbeek (see photo). On the wallpaper he wrote down his score and a defiant personal message above it. The wallpaper is now on display in the Hartenstein Airborne Museum (see photo).

Tony went onto serve with the Pathfinders in Norway and Palestine. When the 21st was disbanded in 1946 he opted to join the 3rd King's Own Hussars, on armoured cars and was eventually demobbed in 1947.

In civilian life he returned to engineering working mainly as a turner.

Profile compiled by Harvey Grenville with the kind assistance of Tony Crane, Don Clark and the 3 video clips (copyright Word of Mouth Films) are extracts from Don’s interview with Tony Crane in 2005. (Website www.wordofmouthfilms.co.uk)

Tony was born in Wrexham in October 1924, the son of an Army soldier. His father, a World War I veteran who had fought at the Somme, ended up as a Sgt Major PTI. 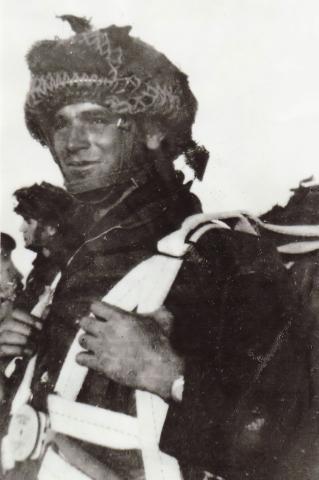 George VanderMost said:
Tony Crane was also interviewed for the Airborne Museum, Oosterbeek. A short film was made at the spot where he fought. This film is now part of the exhibition in Oosterbeek. He died shortly after the film was made, we have lost a good friend.
Add your comment