Alexander Stuart Fairey was born on 8 May 1971 in Houghton, in the Test Valley, Hampshire, where he spent his childhood.

Graduating from the Royal Military Academy Sandhurst in 1991, he was first commissioned into the Gordon Highlanders (now The Highlanders, 4 SCOTS) before transferring to The Parachute Regiment, where he remained until his death in a motorcycle accident on 5 November 1997.

During his time with the Parachute Regiment, Alex served in both 2 PARA and 3 PARA, conducting operations in Northern Ireland and training for arctic warfare in Northern Norway.

Throughout his life, Alex pursued many adventure training activities with great enthusiasm, working as an instructor at a centre in New Zealand, with John Ridgway at Ardmore in Scotland, and helping to run the Army's Adventure Training Centre in Bavaria, Germany.

The aim of The Alexander Fairey Memorial Fund (AFMF), set up in his memory, is to assist young soldiers and officers from both his former Regiments or young people from Hampshire and the Test Valley in particular to pursue and benefit from the same challenging and character-building activities that he enjoyed so much.

The PARAS 10 race embodies this adventurous, airborne spirit which the AFMF seeks to promote in young people and the Alexander Fairey Memorial Trophy is presented to the winner of the junior event.

Courtesy of the family of Alex Fairey and Bob Hilton

Alex Fairey, late of Support Company 3 PARA, was tragically killed on 5 Nov 97 while riding home on his motorcycle. He was 26 years old. 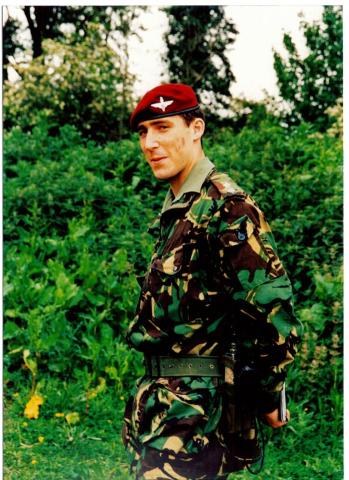