He volunteered for airborne forces in early 1942 and undertook Parachute Training Course 11 at RAF Ringway which ran from 6 to 18 April 1942.

Lance Corporal ‘Joe’ Simpson was posted to A troop, 1st Parachute Squadron, Royal Engineers. He was sent on Operation Torch, North Africa. He was Mentioned in Despatches for his action during the Battle of Mansour and award the Silver Star by command of General Eisenhower.

The citation for the Silver Star reads:

WILLIAM LESLIE GEORGE SIMPSON, 1919427, Lance Corporal ********** Squadron, Royal Engineers, British Army, for gallantry in action with the Army of the United States on 5 February 1943 near Djebel-Mansour, Tunisia. Reaching his battalion just as the order was given to withdraw, Lance Corporal Simpson remained to assist in the destruction of equipment which could not be removed. He then single handedly carried a wounded man through heavy enemy fire for a distance of two miles to a medical station. Later, while searching for more wounded men, he was able to guide a party of stretcher bearers to safety. His courage and devotion to duty were an inspiration to all.

By command of General EISENHOWER.

Corporal Simpson went on to fight in Sicily and Italy before returning to the UK.

He went on Operation Market Garden (Arnhem) and was killed by a grenade along with L/Cpl Neville on 20 September 1944, aged 29 years. He was given a field burial in a group of graves by a road near the ruined buildings at the Rhine Bridge at Arnhem. On 29 October 1945 he was reinterned at Oosterbeek War Cemetery, Arnhem.

If you are part of Corporal Simpson's family and would like to complete this biography, you can apply to the curator to do so. To do this you will need to become a member of ParaData and select the 'friend or family member' option on the registration form. If you would like to find out more about becoming a member please visit our registration page. 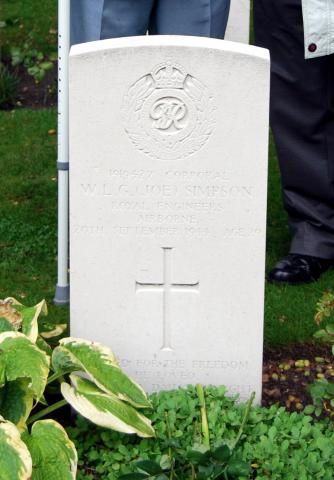