William Kershaw volunteered for airborne forces in 1942 ‘for a change’, transferring from 70th Battalion the Royal East Kent Regiment ‘The Buffs’. He passed selection at Hardwick Hall overseen by CSM Strachen (who had been wounded at Bruneval), later attending the 42nd Parachute Course with two officers and 55 ORs held at Ringway between 14-25 Dec 1942. His course report noted he was a ‘good performer throughout’ and he passed after completing two balloon and five aircraft descents but was injured on the final qualifying jump.

He was posted to ‘R’ Reinforcement Company the 4th Parachute Battalion commanded by Lt Col Tony Dene and then to ‘A’ Company, after which they departed for North Africa. On 3rd September 1943 he landed at Taranto Harbour with the battalion and was engaged in the initial ground operations. When the 1st British airborne division departed in Italy in preparation for D Day, the 4th Battalion remained behind as part of the 2nd Independent Parachute Brigade.

Bill Kershaw jumped into Southern France on 15th August 1944, with the starboard engine of his Dakota set on fire by flak. ‘The drop was an absolute disaster’ he recalled ‘and we were five miles from the drop-zone’. Having been separated from the main body of the 4th Parachute Battalion his group split up and exfiltrated back to Allied lines. After some two weeks he made it back and returned to Italy with the battalion.

On 12th October 1944 he jumped in high winds at Megara airdrome in Greece some 40 miles west of Athens, smashing the mine detector he parachuted with on landing. During the winter of 1944-45 he was involved in street fighting in Athens, separating the warring combatants in the ensuing Civil War, ‘a short but sharp operation’ he remembered.

After recovering back to Italy with the 2nd Independent Parachute Brigade the 4th Battalion was on stand-by for a jump in the Po Valley ‘when the Germans packed it in’ in May 1945.

Following disembarkation leave in the UK the 4th Parachute Battalion departed for Palestine, with Bill Kershaw now promoted to L/Cpl. ‘We were sent there so the Arabs and Jews could shoot at us rather than each other’ he recalled, ‘after they got down to the more serious business of killing each other'.

Bill Kershaw born in 1923 lied about his age on joining the Royal East Kent Regiment in 1939. He decided to join the Paras, which had just started recruiting in 1940. 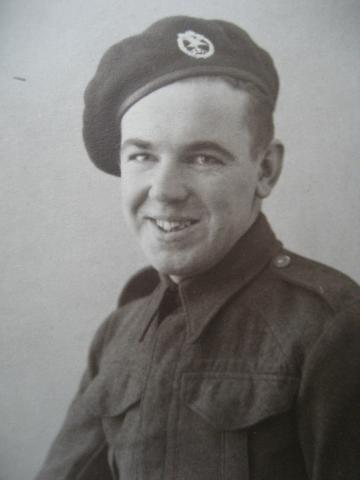