The QUEEN has been graciously pleased to approve the award of the Queen's Gallantry Medal to the under mentioned in recognition of services in Northern Ireland during the period 1st May 1974 to 31st July 1974:

His award related to an incident in the Shankhill Road.

Citation
An officer and seven men from 3 Para were patrolling, when they were confronted by an angry mob of approximately 200. Against the advice of Pte Jenkins the officer dismounted from the safety of the vehicle (Humber Pig) and walked towards the mob intending to talk to them. The mob set upon the officer so Pte Jenkins dismounted and rushed into the crowd, rifle butting until he was able to rescue the injured officer. As they tried to get back on board the mob was scrambling all over the vehicle and trying to drag the driver out, Jenkins got permission from the officer to fire one warning shot over their heads which had no effect. In fact, shortly after this a lump of concrete hit the officer on the head, seriously injuring him. Jenkins took charge from this moment and shot the two nearest rioters enabling them to initiate an escape during which a further four were shot.

“The genes of bravery”

Willie was born in 1949 in the house that we still live in County Dublin.

He was the oldest born to John and Julia Jenkins. There were four boys and four girls.

From the time he was a little boy all he could think about was the army he played with toy soldiers all the time, he even found an old war helmet in the grounds of the German Ambassador House earning him the nick name of German head as he’d go around wearing it.

His comics and magazines were all about soldiers he just loved playing with his tanks and things. He had a passion for history and geography.

My Da was a seaman all his life and loved the sea, but Willie never took to it, he just couldn’t, but his brother John did.

Work was hard to come by and Willie would take work where he could find it, on the coal boats or whatever came his way. In those days you’d stand on the corner waiting to be picked for work.

His Da had joined the Merchant Navy and had served on the Russian Convoys during WW2 sailing on the Ocean Verity delivering food, supplies, tanks and ammunition to Murmansk and then, in 1943 whilst on the ship Irish Oak it was torpedoed, fortunately he survived. Willie was incredibly proud of his Da and in his later years he worked hard on claiming his Da’s WW2 medals as John had been awarded them but they had gone unclaimed for nearly fifty years. The big one was the Russian Convoy medal; eventually John Jenkins was the first man in the Republic of Ireland to be awarded it. Even more incredibly John Jenkins after WW2 would go on to save the lives of 49 people as he was Coxswain of the local lifeboat crew.

We were a very ordinary working class family who worked hard to put food on the table.

Willie went away before I was born but he returned home occasionally to see family and me. I vaguely remember when I was about three years old, a man taking me to see some dogs, it was Willie.

In 1970 aged 21, Willie joined The Parachute Regiment, joining training platoon number 355 along with two other battalion legends Terry Caroll and Liam McKevitt, after passing P Company and gaining his wings at RAF Abingdon he was sent to join the 3rd Battalion, The Parachute Regiment, shortly after joining his new battalion in January 1971, he was sent to Northern Ireland as part of Operation Banner, this would be the first of many tours of Northern Ireland for Willie.

In 1974 Once again Willie returned to NI, he was now aged 25 years old, it was here Willie helped save the life of a young army officer 2nd Lt Peter Anthony James Everard during an incident on the Shankhill Road, for his bravery he was awarded the Queens Gallantry Medal.

I remember my family telling me why he couldn’t come home and why I couldn’t see the brother that I’d heard so much about who jumped out of planes and was a soldier.

The IRA had came and took my Da away with threats that they would blow us up and kill Willie.  So my Da had to tell him it was too dangerous to come home.

He would always write, send money and gifts home, from wherever he was. When he received the QGM my parents got a telegram to tell them, but at first they thought he’d died in action because of the telegram.

We were all so very proud of him. I got to meet Willie again when he got married, It was great been reunited again, my parents would visit Brecon as much as possible over the years.

He regretted leaving the army till the day he died, he may have left the army, but the army never left him.

Even when his brother John died in 1992, due to a tragic seafaring accident, the police informed him of John’s death and sadly he had to grieve alone and regrettably, he couldn’t attend his own brother’s funeral because his Da told him it would be too dangerous.

When Willies Da died two years later, after the funeral Willie unexpectedly walked into to the house without any of us knowing he was home, except for his brother Michael, he had returned to be with his mam. He stayed a few days and went back home.

He sold his QGM one year after his wife had left, leaving him with three young children to take care of and we were unaware that he was struggling, as he was a proud man and wouldn’t tell family of how much a hard time he was going through.  He was working in a field for ten pound a day picking potatoes, so he sold it because he had a large gas bill to pay and no money. He said it was a very bad winter and he’d no choice.

I remember the first gulf war, he said that he was hoping they’d call him back for it, and that as I was old enough to take care of his kids.

However, he never got called and he devoted his life to taking care of the children. Occasionally He’d travel back home to Ireland when he had a job, and I visited him for many years as my mum was too old to travel

I remember I was in Birmingham when I was told he was in hospital sick, my cousin drove me down to see him.

When I saw him I knew he was dying but he didn’t, I asked if he’d like me to stay in Brecon for a while with him he was delighted.

I stayed and they couldn’t diagnose anything so I asked if he would like to come home to Ireland to get help, he jumped at the chance. The day before we left I remember he cooked dinner, fillet steak with apple tart. He was like my Dad for cooking and baking, he wouldn’t let his kids eat rubbish.

He came home and I took him to the doctors and hospital for immediate diagnose, and yes our worst fears was coming true, I was told before he woke up, that it was lung cancer and there was nothing they could do.

He took chemo and radiation not for himself but for the kids, they tried to operate but when they opened him up, it was wrapped around his heart so they couldn’t touch it.

Funnily enough, he nearly killed me with his stern looks and mouth, once when I asked the doctor where he came from, he replied, “Newfoundland” I said where’s that? And Willie exclaimed, “Oh my God, you’re bloody thick, didn’t you ever read the atlas I sent you” The answer was no!

If I was to tell you leading up to his death was easy for him, I’d be lying.  He suffered very badly there were very hard times, where he’d be so ill.  But we also had good times where we’d laugh and times where Willie and I would kill each other, but such was his nature, a big softie he would always be the first to apologise where I’m a stubborn person.

He planned his own funeral to the last. The guys were fantastic all the way through his illness phoning him and flying over to see him. I’ve had friends in my life but I never knew what it was like to have real friends like them.

We can never repay them for everything they did for him and us.  And we will never forget them. Willie was laid out in his coffin under the window 56 years after been born, in exactly the same place, under the window.

I hope this is ok. If you need to know anything more just let me know.  We both have a sarcastic sense of humour it runs in the family.

I miss my brother, I’ve so many stories but only so much you can write.

Thank you so much.

Willie’s little sister ‘Jelly Jaws’ he called me, that and a lot more. 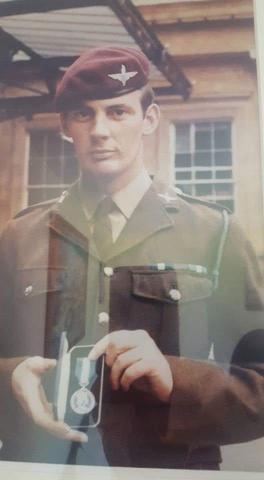 Robert Linton said:
I knew Willie well. We were at school together in Dun Laugharne & I knew his whole family. Willie went to 3 Para & I went to 2 Para. It was a dangerous time for guys from the south of Ireland to join the British Army never mind the Para Regt. I ended up in 2 Para mortars after a spell in B Coy. Another South of Ireland guy I remember fondly was Jim Kennedy, one of the best para regt drivers I ever did patrols with. Sadly Willie passed away some years ago & is buried in Shanganagh Cemetery, near Bray, Co.Wicklow. He has the distinction of being the only para buried there. I always liked Willie, he was one tough guy in his day. R.I.P
Add your comment