Bill spent his early twenties with three years service in the Merchant Navy with the Shaw Saville and Albion Shipping Line, employed as an engineering officer, the 2nd Refridgeration Engineer.

Bill initially joined Depot Para, at Maida Barracks, on 30 August 1965 as a 25 year old. After completion of his selection training and parachute course, he joined 2 PARA in March 1966, as part of the Battalion Intelligence Section under Captain S.A.S. Hill and Sgt Pete Prior.

The Battalion returned home to Aldershot in 1967. From here, Bill took part in exercises that year in the UK and abroad in Denmark and West Germany. The following year, the Battalion were sent to Malaysia for Jungle Warfare Training, based at Burma Camp, in Kota Tinggi Province. Later that year, they were sent to Hong Kong to relieve 18 Light Regiment RA on border security duties, and were deployed in Hong Kong from July to December 1968.

Bill returned with 2 PARA to the UK for a spell of disembarkation and Christmas leave. In February 1969, during the Cpls Mess 'Welcome Home Ball' at Maida Gym, rumours of a possible deployment to Anguilla to quell an uprising on the Island. A month later, in mid-February, Bill was sent to Anguilla with the Battalion (less B Company), although once civil order had been restored (and B Coy arrived) he was able to enjoy a further months 'Rest and Recuperation (R&R)' on the Island before returning home to Aldershot.

Later in 1969, the Battalion carried out another exercise in the British Army of the Rhine (BAOR), before spending the rest of the year back in the UK at the Barracks. Bill decided to seek a transfer to the Royal Army Ordnance Corps during this time, which was finally by the CO Lt Col Dawney in January 1970.

Prior to his transfer however, the Battalion was warned off for movement to Northern Ireland, finally moving in to Belfast in February 1970. Consequently, Bill was retained for a time in the Battalion rear party, until he completed his transfer moving to Blackdown Barracks, Deepcut to begin the B3 Storeman's Course.

Following completion of his B3 Storeman's Course, he went on to complete a B2 Storeman's Course and was posted to the Central Ammunition Depot, at Bramley outside Bassingstoke, Hants for his final military posting.

Bill remains active in the veterans community, and is the current Secretary for the Nottingham Branch of the Parachute Regiment Association (PRA). 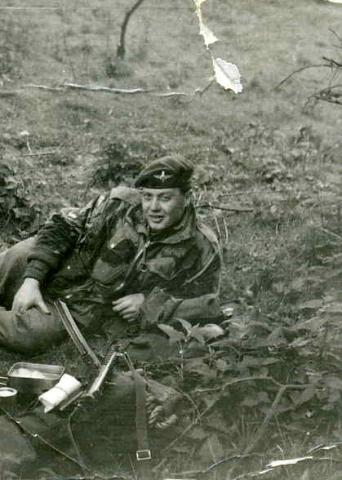