Tom Hill was serving with The Argyll and Sutherland Highlanders as a corporal when he answered a call for volunteers to support the expansion of British Airborne Forces during World War II with the formation of 1st Parachute Brigade.

After completion of the selection course at Hardwick Hall, he was posted to 2nd Parachute Battalion, then in the process of forming up, and assigned to C Company.

Along with other members of C Coy he attended the first parachute training course for personnel of No 1 Parachute Brigade at RAF Ringway in November 1941. He returned to Ringway with C Coy for the brigade's first advanced training course involving a night descent from a balloon and aircraft descents with arms containers in January 1942.

Shortly after returning from their advanced training, C Coy began intense training and preparation for the Bruneval Raid, a daring parachute operation into enemy occupied France to capture components from a German Würzburg radar installation in February 1942.

Cpl Tom Hill was a member of Lieutenant Euan Charteris’ 'Nelson' group for the raid and flew in the Whitley aircraft numbered Z9322 piloted by Wing Commander Pickard DSO DFC. Nelson group's role was to secure the withdrawal route and the beach from where they would be lifted off. However, Lt Charteris' stick, including Tom Hill, and another stick from Nelson were dropped in the adjacent valley, some two miles away of the intended drop zone, near a small village called L' Enfer.

Laden with arms and ammunition from the parachute containers they made their way through Bruneval village and after making contact with Lt Timothy's Rodney group, moved on to attack and clear the German beach defensive positions, including the Villa Stella Maris, working in conjunction with the groups commanded by Captain Ross and Lt Naumoff.

Tom Hill was eventually lifted off with the rest of the raiding party by the Royal Navy and returned to the UK. Later that year he deployed with the 2nd Para Bn to North Africa for Operation Torch.

He was later injured during a training jump when his chute failed to deploy properly and he was medically discharged from The Parachute Regiment. He spent the rest of the war escorting POWs around the UK. 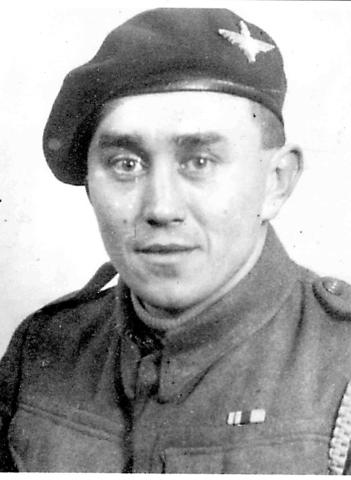