Thomas Frederick Stevens grew up in Tilehurst near Reading, Berkshire.

He worked as a Sorting Clerk and Telegraphist with the GPO prior to enlistment on 2 October 1941 into the Royal Corps of Signals. The Army trained him as a Wireless Operator and a Lineman, and he was posted to an Anti-Aircraft Signals Unit on completion of his training.

Tom was briefly hospitalized at the end of March 1944 and returned to the 6th Airborne Divisional Signals on 4 April 1944. At some stage during his training he was assigned to the 6th Air Landing Brigade Headquarters as a radio operator.

On 6 June 1944 he emplaned for Operation Overlord, the invasion of Normandy, at either RAF Harwell or Brize Norton and landed on LZ N in a Horsa glider. He either flew in with the 6th Airborne Divisional Headquarters (Chalk Numbers 70-89, Operation Tonga) as an advanced radio operator for Brigadier Kindersley at 03.00 hours or with the main 6th Air Landing Brigade Headquarters (Chalk Numbers 94-108, Operation Mallard) at 21.00 hours.

Tom saw service throughout the 6th Airborne Division’s campaign in Northern France and returned to the United Kingdom on 2 September 1944. After some leave he returned to Bulford Camp, where the division was undergoing further training and taking on more reinforcements. He and the rest of the division were warned off to help in the Ardennes campaign. Tom embarked for North West Europe on 23 December 1944.

At the conclusion of the Ardennes campaign he remained behind on the Continent with the ground element of the 6th Airborne Division and took part in the holding of the line along the Dutch border. In March the ground element began preparations to support the rest of the 6th Airborne Division when it landed on Operation Varsity on 24 March 1945. He then served in the campaign that took the division across Germany to Wismar on the Baltic, returning to the United Kingdom on 22 May 1945.

Tom remained with the 6th Airborne Divisional Signals and embarked for the Middle East on 4 October 1945 to serve in Palestine.

He was transferred to the 31st Infantry Brigade Headquarters Signals Section on 15 April 1946. Tom returned to the United Kingdom in October 1946 and was discharged from Army Service upon his return.

Tom's Testimonial described his conduct as GOOD, and his officer wrote of him; 'Very pleasant, always tidy and keen at his work. Is very keen to better himself'.

The following post-war information came from a work colleague, Brian Sanders, who worked with Tom at the Exchequer and Audit Department of the Civil Service.
“After being discharged from the Army in 1946, Tom returned to the GPO and continued his Sorting Office and telegraphist duties. Whilst there, during some of his spare time, he studied law, bookkeeping and auditing to progress within the Civil Service.
In the late 1940s Tom left the GPO and transferred to the Land Board. He left there and joined the Exchequer and Audit Department in the rank of Assistant Auditor on 1 July 1950. He was assigned to the audit of the Post Office at GPO Headquarters, London EC1. This was followed by the audit of the Ministry Of Transport at Berkeley Square, London from 1953 to 1958, and then a three year posting based on Singapore to audit the Army and RAF in various locations in the Far East including periods at Hong Kong.
His wife Ellen, daughter Helen and her brothers Tony and Keith went with him to Singapore and their lifestyle there was one to be envied with staff to help in the house and garden; the gardener, with the magnificent name of Vas Vellingham (alias Vassy) was a superb badminton player who could stand at one end all day and return anything and everything shied at him. There were also visits most days to the glorious Old Singapore Swimming Club, with the children soon becoming very strong swimmers.
On return to the UK Tom's further postings in the Exchequer and Audit Department included the Crown Estates at Bracknell and the AWRE at Aldermaston.
He had suffered with a weak chest for several years and had bouts of bronchitis. He eventually transferred to a ‘lower position’ in Her Majesty’s Customs and Excise in order to remain in the Reading area rather than doing a lot of travelling. If he had remained as an Auditor, he would have had to go and work at some stage with the Exchequer and Audit Department in London and he felt the commute would not be good for his health. His move to the Customs and Excise was a smooth transition and based locally in the Reading area.
He retired at age 60 from the Civil Service but due to a wrong diagnosis, (he was told he had Tuberculosis from his time in Singapore in error) he died at just age 66 from Lung Cancer. He smoked a pipe, though he was not a heavy smoker but his weak chest could have impacted on the disease.
Tom was indeed a character and could always tell a good story and had a very philosophical view on life”.

By Bob Hilton with the kind assistance of Helen Ewers, daughter of Tom Stevens. 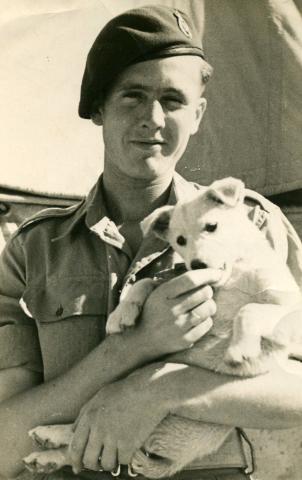