Stanley Aylward originally joined the Queens Royal Regiment at the outbreak of the Second World War.

Aged 22 years old and serving in the Middle East, he volunteered to join the newly formed 156 Parachute Battalion (156 Para Bn). He undertook parachute training course 25 which ran from 25 February to 6 March 1943 at No 4 Middle East Training School (No 4 METS) at RAF Kabrit, Suez Canal Zone, Egypt. He was posted to HQ Company, 156 Para Bn.

156 Para Bn and Brigade HQ formed the lead elements in the capture of the port of Taranto in September 1943. Facing a skilful German rearguard action they spent several weeks advancing north east, first to Bari and then Foggia. The Battalion left Italy in November to return to the UK to prepare for the invasion of Europe.

Private Aylward boarded a Douglas Dakota C-47 at Saltby Aerodrome and arrived with the second lift at Arnhem on 18 September 1944, jumping out onto Landing Zone (LZ) Y (Ginkel Heath) under heavy fire. After making a successful decent, Pte Aylward was shot in the knee whilst still on the LZ and sheltered under a parachute canopy until discovered by medics.

When the field hospital was overrun by German forces, he became a Prisoner of War, being sent to Stalag XIIA Limburg Germany.

After liberation in April 1945, he was posted to the 8th (Midland) Parachute Battalion and served with them in Palestine until demob in 1946. 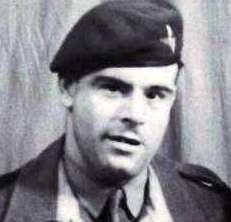