Sid Blackmore joined the King’s Own Rifle Corps aged 18, and later volunteered for The Parachute Regiment.

Pte Blackmore, along with the 2nd Battalion returned to the UK to prepare for D Day but was held in reserve. On 17 September 1944 he parachuted into Arnhem and formed a bridgehead at the North side of the bridge. Pte Blackmore was the No 2 man on a PIAT with Pte Robert Lygo as No 1.

On Wednesday 20 September Pte Blackmore was wounded and lost consciousness. He was taken to Appeldoorn Hospital but only recovered consciousness as he was being taken to Stalag XIB as a POW.

Pte Blackmore was returned to the UK 10 months later.

Sid Blackmore married Wyn and made several annual pilgrimages to Arnhem in his later years. He was an active member of the Eltham and Chislehurst PRA, becoming Branch President.

By Rebecca Blackburn with information supplied by The Pegasus Archive, CWGC and Eltham and Chislehurst PRA 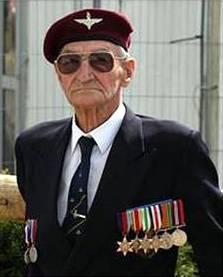