Bob Midwood served in GHQ Liaison Regiment prior to attendance at an Officer Cadet Training Unit. He was granted an emergency commission in The Reconnaissance Corps on 24 January 1942 and transferred to The Parachute Regiment on 14 December 1942.

He qualified as a military parachutist on Course 44 which ran from 28 December 1942 to 8 January 1943 and subsequently served with No 2 Platoon, 22nd Independent Parachute Company, the pathfinder unit for 6th Airborne Division which took part in the Normandy landings.

On the night of 5 June 1944, Bob Midwood took off from Harwell airfield in an Albermarle aircraft bound for DZ-K in Normandy. The stick parachuted onto the DZ shortly after midnight, and came under heavy fire almost immediately on landing.

Bob Midwood sustained injuries while jumping onto the DZ but continued to take part in operations including commanding a patrol to protect a REME recovery section working on an LZ and marking drop zones for supply drops.

He was evacuated to 86 General Hospital on 19 June to have his injuries treated.

Bob Midwood returned to active service and was wounded for a second time, in January 1945, during the Ardennes campaign. 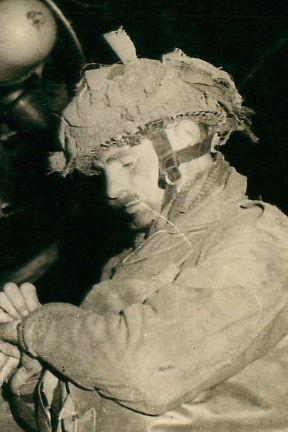