Tony’ Leake enlisted into the Lancashire Fusiliers on 24 October 1942.

Having volunteered for airborne forces and completed a parachute course he was posted to the 8th (Midlands) Parachute Battalion, where he was assigned to 6 Platoon, B Company.

He took part in the Normandy landings and was wounded on 17 August 1944.

After his recovery he transferred to the Royal Army Medical Corps and was posted to 224 Parachute Field Ambulance, with whom he parachuted across the Rhine on Operation Varsity, in March 1945. By this time he had been promoted to Corporal.

He stayed with 6th Airborne Division and went to Palestine.

After his discharge from the Army he became a Doctor.

‘Tony’ carried out extensive research about his battalion and its part in the Normandy campaign for the Airborne Forces Museum throughout the 1980’s and through into the turn of the century.

He was number 3 of the 12 D-Day veterans whose portraits were specially commissioned by the Prince of Wales and featured in ‘The Last of the Tide’ on show in The Queen's Gallery, Buckingham Palace to mark the 71st anniversary of D-Day.

'Tony' Leake's account of a glider crash on D-Day 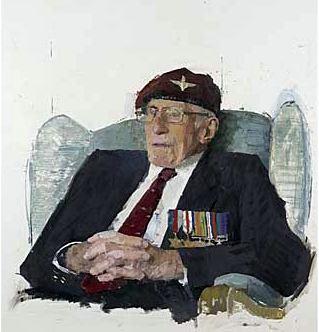