Richard Nelson ‘Windy’ Gale was born on 25 July 1896 in London, England. The early years of his life were spent in Australia and New Zealand, but the Gale family returned to England in 1906 where he was educated at Merchant Taylors' School, Northwood and Aldenham School in Hertfordshire. When Gale left Aldenham he wanted to become an officer in the Royal Artillery, but did not possess the academic qualifications or physical grades required for entry into the Royal Military Academy, Woolwich. Instead he followed in his father's footsteps and gained employment as an insurance agent, but rapidly grew to dislike the job; determined to enter the British Army, he attended regular physical training classes and studied hard to improve his academic grades.

When World War I broke out in 1914, Gale was still below the medical standards required for a recruit and failed to join a Territorial Army unit in London. He finally gained entry to the Royal Military College at Sandhurst in the summer of 1915 and before the end of the year had been commissioned into the Worcestershire Regiment as a Second Lieutenant. When Gale joined the regiment, he put his name forward for a course on training with machine guns and was accepted, being transferred to the Machine Gun Training Centre at Grantham; there he discovered that he had not applied to join a course, but to actually join the Machine Gun Corps. In short order was posted to the Western Front and it was during his service as a subaltern in France that he won the Military Cross for 'conspicuous gallantry and devotion to duty' during the Spring Offensive launched by the German Army in mid-March 1918. He covered the retreat of a British infantry unit with his machine gun section, and when an artillery shell landed by a gun limber, he unhitched the killed and wounded horses under heavy fire to allow the limber to be moved away.

When the war ended in 1918, Gale volunteered to go to India and serve with the British Indian Army, remaining in the Machine-Gun Corps until it was disbanded in 1922 and then reverting to serving with the Worcestershire Regiment. During his time in India he gained entry to the Staff College at Quetta and after two years in the institution he graduated as a staff officer.

Gale left India in January 1936 and returned to England to serve with the Worcestershire Regiment. After a year he was then transferred to the War Office as a General Staff Officer with responsibilities for the creation of training pamphlets and publications. In December 1938 he was promoted to Major and moved to the Staff Duties (Planning) section of the General Staff.

By 1941 Gale had been promoted to the rank of Lieutenant Colonel and given command of a Territorial Army battalion of the Royal Leicestershire Regiment. Then in the summer of 1941 1st Parachute Brigade was formed as part of the expansion of the British airborne forces, and Gale was offered command of the Brigade by General Alan Brooke. After a period spent organizing the Brigade, choosing officers and devising new training schemes, Gale was then posted to the War Office in 1942 as Deputy Director of Staff Duties, and subsequently promoted to Director of Air.

Gale's remit as Director of Air was to attempt to formulate a clear policy about the use of airborne forces between the Army and the Royal Air Force, as well as to solve the aircraft shortages that stymied many attempts to conduct further airborne operations.

Then, in May 1943 Gale was promoted to the rank of Major-General and assumed command of the newly-formed 6th Airborne Division. Gale had just under a year to organize and train the division before it was due to participate in Operation Tonga and Mallard, the British airborne landings in Normandy in June 1944.

The division was initially understrength due to trained airborne troops being transferred to North Africa and Sicily to replace the losses suffered by 1st Airborne Division during its operations, but it was soon expanded with the arrival of a Canadian Parachute Battalion, as well as the formation of 5th Parachute Brigade and 6th Airlanding Brigade. No British airborne division had ever been deployed into battle entirely through aerial means, and devising plans and formulating tactics for the operation placed a great deal of pressure on Gale. However, Gale's thoroughness paid off when the division successfully landed in Normandy in June 1944, with Gale accompanying the division and landing by glider. For his part in planning and taking part in Operation Tonga, Gale was awarded the DSO on 29 August 1944. On 5 September the division was taken out of the frontline and returned to England for rest and recuperation; Gale did not remain with the division, instead being appointed to the headquarters of First Allied Airborne Army. In the last months of the conflict, he was given command of I Airborne Corps.

Between 1946-1947 Gale was given command of the 1st Infantry Division when it served in the Middle East, and in 1948 he was appointed General Officer Commanding British Troops, Egypt and Mediterranean Command. Then in 1949 he was transferred and became Director-General of Military Training. Then, after three years he was promoted to Commander-in-Chief, Northern Army Group, Allied Land Forces Europe and British Army of the Rhine, which he held until 1957. Gale initially retired in 1957, but early in 1958 he was recalled to serve with NATO and replaced Field Marshal Bernard Montgomery as Deputy Supreme Allied Commander, Europe; he retired permanently in 1960 after three years in the post.

Gale died in a hospital in Kingston upon Thames on 29 July 1982.

By Bob Hilton, edited by Rebecca Blackburn and Sam Stead

On 2 June, when Gale visited the 9th Parachute Battalion at RAF Broadwell, he received an enthusiastic reception and said of Normandy, "The Hun thinks only a bloody fool will go there. 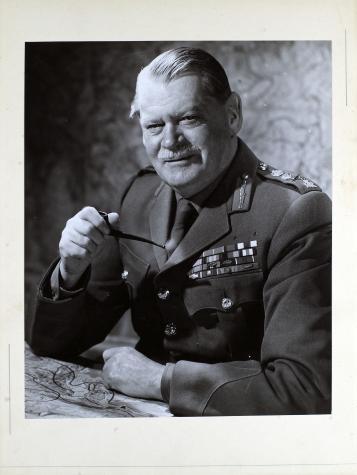