Richard George Wilson was an apprentice maintenance fitter in Burntisland, in Scotland, when he enlisted into the Gordon Highlanders. He gave his age as 19 although he was only just over 17 years.

He was later posted to the Royal Artillery in Kent and was trained as a Gun Position Officer’s assistant. He then requested a transfer to the Royal Armoured Corps (RAC) and was posted to 141st Regiment RAC.

Gunner Wilson volunteered for airborne forces and after completing the required training became a Sergeant Pilot in the Glider Pilot Regiment.

Sgt Wilson flew a glider on Operation Market Garden, his No1 pilot ‘Jock’ Dunbar was shot and died before landing. After the order to withdraw, he managed escape across the river and returned to England. When he arrived back at his hut at Down Ampney only five of the thirty pilots that were based in that hut had returned. He wanted to send his fiancée, Rita Kean, a telegram, telling of his safe arrival. The original of this telegram is now held by the Imperial War Museum.

In December 1944, he was sent to India as part of a combined Army and RAF glider force to prepare for an invasion against the Japanese in Burma. In March 1945 the ‘wing’ moved south to Belgaume for jungle training. Having completed jungle training he moved to the Delhi area to await an invasion of Burma. But before that could happen the Japanese capitulated.

He retired after 27 years service in 1969, having attained the rank of Warrant Officer Class II.

In September 1994 on the 50th anniversary of Arnhem, a letter was published in the Fife Free Press, asking for information regarding a name and address scratched on the door lintel in the cellar of a house in Arnhem. Richard had scratched the message while sheltering in the cellar. Details of this can be found in the copy of the local paper opposite. 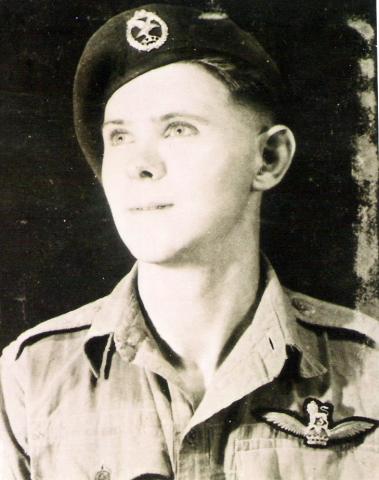