Peter John Luard was commissioned into The Oxfordshire and Buckinghamshire Light Infantry (The old 52nd Light Infantry) in January 1931.

From 1932 until 1936 he served in the 2nd Battalion, stationed in Burma. Promoted to Captain and Adjutant, he spent from 1937 until 1940 at Oxford. He was then posted as a Staff Officer Grade 3 for the 31st Infantry Brigade (later to become the 1st Air Landing Brigade) and after a Staff College Course, and a short appointment in the 6th Bn Ox and Bucks Light Infantry, he became the Deputy Assistant Adjutant and Quarter Master in the 31st Brigade.

He qualified as a military parachutist on course 11, which ran at RAF Ringway in April 1942, and on 27 July 1942 he was posted to the 4th Parachute Battalion as the Second In Command.

Luard had married Alicia Morrell in 1938, and they had twin sons, Richard and Thomas, born on 24 October 1942.

He was given command of the 13th (Lancs) Parachute Battalion in September 1943 and set out about preparing the battalion for the mainland invasion of Europe.

When Luard landed in Normandy, on his 33rd birthday in June 1944, he rallied his men at the rendezvous by sounding his hunting horn. Compared to the other parachute battalions of the 6th Airborne Division, the 13th Battalion assembled tolerably well after the drop with 70% of their strength accounted for.

The battalion soon went about its main task of clearing the enemy from the village of Ranville, which was accomplished by 0400, having been greatly assisted by the fact that the majority of the garrison, a company of the 21st Panzer Division, had been on manoeuvres when the landings began.

On 10 June, the German 346th Division successfully drove a wedge between the 3rd Parachute and 1st Special Service Brigades in the Breacuteville area and its leading units headed directly for Ranville, where the 13th Battalion had been placed for just such an eventuality. The German infantry made their way across the excellent cover of LZ N, in between the abandoned gliders, and so Peter Luard ordered his men to hold their fire until the very last moment.At a range of just 50 yards, the battalion opened fire, and their intervention, later joined by the fire of the 7th Battalion, tore the German attack to pieces - as many as four hundred of their number were killed and a further hundred taken prisoner.

In late August, during the Advance to the Seine, the 13th Battalion was presented with two particularly difficult operations to carry out. The first of these occurred at Putot-en-Auge on 19 August, when the battalion was ordered to advance and capture a feature known as Hill 13. The prospect for this attack was not at all a happy one as it required an advance over three-quarters of a mile of utterly open ground, and then an attack up the hill, which would probably be strongly resisted.

Luard later wrote:
'Obviously, speed was the only way to cross the open space and I called my company commanders and issued my orders. B Company, commanded by Major Reggie Tarrant, was to lead, followed by Battalion Headquarters, then Major John Cramphorn's A Company and finally C Company which was commanded by Major Nobby Clark.
I said that it was my opinion that the Germans would not expect us to do anything so mad, and that by the time we had started, and they had given the necessary orders to engage, we had a fool's chance, and a good one, of getting away with it. In any case, we had no real alternative as there was no cover. So off we went. The distance was about three quarters of a mile, of which the middle two hundred yards was the most hazardous. We were all very fit young men and there is no doubt that everyone knew that the speed they made was likely to save their lives. And they moved. The whole battalion was across, except for the last four men, before the Germans realised the danger and opened fire. There were a couple of casualties, neither serious, and I lost my waterbottle but had not the slightest intention of looking for it!
Major Reggie Tarrant and his company went straight up the hill with A Company, under Major John Cramphorn, supporting them. I remember so well seeing them storming into the Germans, using the bayonet and getting right to the top of the hill. Then - suddenly - they were counter-attacked and a well-sited machine gun opened up, seriously wounding Major Tarrant and killing Lieutenant Bibby, who was leading his men with the utmost gallantry, and killing many others. The leading platoons were almost all killed or wounded and the supporting platoons fell back to join us on the intermediate ridge. What had happened was that a fresh German battalion had arrived to reinforce the hill position and they had caused the damage. Had we been just a little earlier, it would have been more difficult for them. But it was not so.
The Germans counter-attacked very well and I remember lying with the men of A Company in the grass on the reverse slope of the ridge and hearing bullets singing through the grass all around us. There was no fear; we just felt that as the enemy came into view, they would be welcome to everything we had. At that moment I heard a voice coming from a Bren carrier saying: 'We must have immediate fire. We are being counter-attacked'; It was Colonel Mitchell of the Gunners' talking to his regiment. He had crossed the open ground and there he was, cool and calm. His support was marvellous! The fire from his guns was so accurate that it stopped the Germans about a hundred yards from him.
Realising that the initiative might now be with us again, I told C Company to make a flanking attack to the right. Off they went with Major Clark leading them but the re-entrant up which they had to go was well covered by the enemy and they could make no progress. On reporting to Brigade Headquarters, I was told to hold where we were. This was no difficulty as on the intermediate ridge we were in a commanding position, and in any case the enemy counter-attack had failed. B Company had lost many men and casualties had been suffered by the other companies.
The battalion had been on the move and in action for forty-eight hours, almost without let-up, and was very tired. So we stayed where we were. I had a company commanders meeting and in the middle of it, I was so tired that I went to sleep as I was actually talking. They left me sleeping, and left word that I was not to be disturbed. I woke up two hours later and the rest of the meeting was resumed, with my apologies.

Although the attack had not succeeded in driving German opposition from Hill 13, the area was effectively in British hands as the 13th Battalion held the more prominent position and the general state of the enemy defences in the Putot-en-Auge region had been severely shaken by the 5th Parachute Brigade's other successes of the day.

The second of the major tasks that was assigned to the 13th Battalion was the capture of Pont L'Eveque on 22 August.

For his actions during this most difficult operation, Luard was awarded the Distinguished Service Order.

Luard continued to lead the 13th Battalion throughout the remainder of the Normandy campaign, and later in the Ardennes, Operation Varsity and the advance into Germany. He was still in command of the battalion when they were ordered out to the Far East for the campaign against Japan. The dropping of the atomic bombs brought that to a sudden end.

He handed over command to Roy Leyland in February 1946 and returned to the United Kingdom to take over command of No 1 Parachute Regiment Infantry Training Centre.

Luard retired from the Army on 8 August 1948 to take up farming in Oxfordshire.

DSO Citation for Lt Col Luard, for the Capture of Pont L'Eveque, Normandy, 1944

On the 23rd August, Lieutenant-Colonel Luard, Commanding 13th Parachute Battalion, was ordered to force a crossing over the River Touques and secure a bridgehead on the far bank up to the outskirts 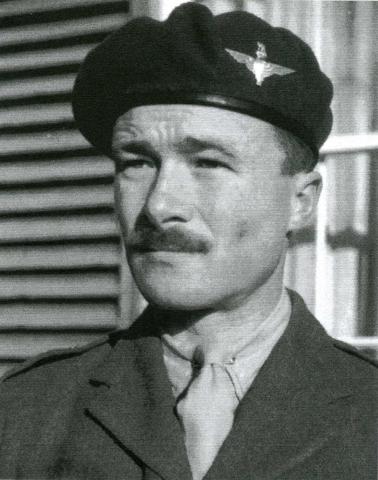