Peter Badger was born on the 12 August 1923, and came from Sheffield. Before he enlisted he was a Bank Clerk. [1]

By 1943 he had gained promotion to Lance Corporal.

Having volunteered for Airborne Forces, and completing the selection process at Hardwick Hall, he was sent on Parachute Course 64, RAF Ringway, 10 – 21 May 1943. Here he completed the following descents to qualify as an Army Parachutist; one by night from the balloon, two daylight from the balloon, and five from Whitley aircraft. His Parachute Instructors comments: ‘Good pupil and Section Leader’. [3]

This course was one of Reinforcements to the 1st Parachute Brigade, and upon completion they were sent to North Africa. Here he was assigned to the 2nd Parachute Battalion. It is likely that Peter Badger therefore took part in both the parachute operation in Sicily (July 1943) and in Southern Italy, on Operation ‘Slapstick’, at the port of Taranto (September 1944).

By 1944 he was the ‘A’ Company Clerk, and was based at Easton Hall in Lincolnshire.

On Sunday, 17 September 1944, he took off from Saltby aerodrome in a USAAF crewed Dakota bound for Holland as part of Operation ‘Market-Garden’. He parachuted onto DZ ‘X’ near Renkum, and after getting to the RV Point he marched with the rest of ‘A’ Company, and the 2nd Parachute Battalion to Arnhem Bridge, where he fought o hold it for the advancing ground forces for four days.

Wounded, he was taken prisoner in the area of Arnhem Bridge on the 21 September 1944. However, according to his German issued POW card he was admitted into the German Lazaret 303 with a ‘suspected pelvic fracture’ on the 22 September 1944. When he was transferred to Stalag XIB, at Falingbostel in Germany, where he arrived on the 30 September, he was diagnosed as having a ‘state of paralysis of both legs’. At this Camp he was given the POW No 117561. [1] & [4]

Having recovered the use of his legs, on the 28 January 1945, he was moved to Stalag 3A at Luckenwalde, near Brandenburg (32 miles to the South of Berlin), where he was liberated on the 20 April 1945, by advancing Russian Forces. [1]

It is very probable that Peter Badger, along with other released British POW’s, decided to make his own way towards the West, instead of waiting for repatriation via the Russian Forces. He must have made contact with advancing Allied Forces by late April or early May 1945, as he is recorded as filling in a POW questionnaire on the 3 May 1945.

However, he is recorded as dying from ‘poisoning’ on the 7 May 1945, aged 21, and was initially buried in the US Military Cemetery at Margraten, plot CCC-251. 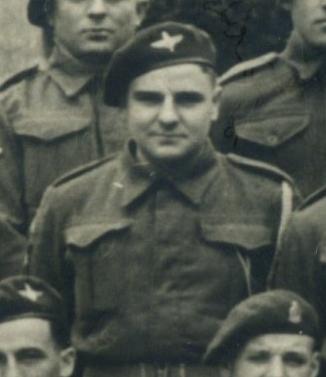