Private Nathan Cuthbertson was serving as a Machine Gunner and Infantry Assault Engineer with 4 Platoon, B Company, 2 PARA when he was killed in action by a suicide device in Helmand Province, southern Afghanistan along with Pte David Murray and  Pte Dan Gamble.

Private Cuthbertson, aged 19, was born in Sunderland on 5 January 1989. He began his military career aged just 16. Having left school he chose not to wait until he was old enough for adult service and attended the Army Foundation College in Harrogate in October 2005.

Whilst at the Army Foundation College he stood out as a soldier and chose to join The Parachute Regiment. Upon completing his initial training he moved on to the Infantry Training Centre in Catterick where he completed his basic training and passed the physically demanding Pre-Parachute Selection, P Company.

Once he had earned his military parachute wings he joined 2nd Battalion The Parachute Regiment in December 2006. With typical energy and drive he quickly embraced the spirit of the Regiment and in under a year had undertaken and passed the technically challenging Infantry Assault Engineers course, usually reserved for more experienced soldiers.

During pre-deployment training and deployment to Afghanistan he again excelled operating the platoon's specialist weapon, the general purpose machine gun. He handled the responsibility with characteristic aplomb and was hugely proud to be the section gunner.

Rarely seen without a smile, he could be depended upon to cheer up the platoon, even in the most adverse conditions from the Northumberland rain of pre-deployment training to the heat of the Afghan summer.

At approximately 1100 hours local time, 8 June 2008, soldiers were on a routine foot patrol 1km west of their Forward Operating Base in the Upper Sangin Valley when their patrol suffered a suicide explosive device which killed Private Cuthbertson and his two colleagues. 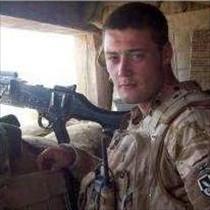