Mike Verrall joined the Parachute Regiment Junior Bandsman and Drummers' School as a cornet and trumpet player in January 1960 aged 16 1/2.  Although a part of the regimental depot in Maida Barracks, Aldershot, the school was located in H Block, Barossa Barracks.  In September he was posted to Kneller Hall, the Royal Military School of Music, at Twickenham on a one-year instrumental course.  On his return to the regiment he passed the All-Arms P Company before taking part in (due to weather conditions) one of the longest-ever basic parachute courses at RAF Abingdon;  Course No 545, 11 November 1961 to 18 January 1962.

On his return to Aldershot he was posted to 1 Para band.  Two one-year postings in Bahrain followed and he then took part in the Parachute Regiment Tournament and Tattoo, which toured America and Canada between September and December 1969, followed by service in N Ireland.  He left the battalion as a Sergeant in March 1972 to attend the three-year army Bandmaster course at the Royal Military School of Music.  While at Kneller Hall the regiment promoted him to Colour Sergeant to maintain his seniority.

On graduation he was appointed regimental Bandmaster (WO1) of the 16th/5th The Queen's Royal Lancers, an armoured reconnaissance regiment stationed in Wolfenbuttel, near Brunswick, and close to the Inner German Border.  After five years as regimental Bandmaster he was offered a regimental commission which he accepted.  Finding a particular aptitude for teaching the automotive systems of armoured fighting vehicles, in 1983 he was appointed Assistant Senior Instructor of the Armoured Wing of the Royal Armoured Corps Driving and Maintenance School.

He left the army for family reasons in December 1987 in the rank of Captain(QM). 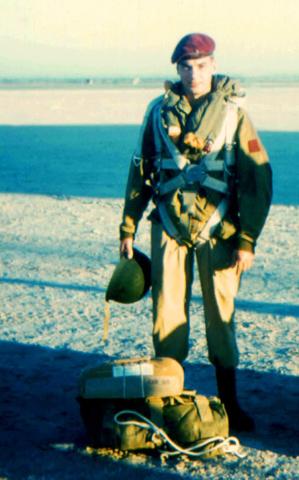