He was awarded his first MC in Palestine in 1939, serving with the 1st Battalion, Queen's Royal Regiment (QRR) during the Arab revolt. On May 23 Forrester, then a second lieutenant, was leading his platoon in an attack on a terrorist group at Abu Salami when he was wounded in the chest.

He continued to command his platoon until he was brought to the dressing station at battalion HQ by the medical officer. When he heard firing close to the HQ, he ran outside, seized a rifle and wanted to lead a counter-attack until he received a direct order from his CO to go and lie down.

"This is not the first occasion on which 2nd Lt Forrester has distinguished himself," his CO wrote in the citation. "In every operation he has been conspicuous for his leadership, coolness and disregard of personal safety."

Forrester was posted to the British Military Mission to Greece in 1941, and when the country was overrun by the Germans he escaped by caique to Crete. There he became liaison officer to units of the Greek Army, which was fighting under the command of the New Zealand Division.

On May 20 1941, when the German airborne invasion began, Forrester was staying in a cottage with Prince Peter of Greece and Patrick Leigh-Fermor. He was ordered to report to HQ NZ Division, which directed him to Galatos, where the remnants of the 6th Greek Regiment had concentrated.

By May 22 the German attacks had reached a key hill near the village — its loss would have put at risk the whole position defended by the New Zealanders. Forrester rallied some 200 Greek troops. A tall, fair-haired man, he disdained to wear a helmet as he led a counter-attack which was joined by Cretan villagers, both men and women, all running and yelling and reacting to his whistled commands.

A New Zealand officer who witnessed the charge said later that it was the most thrilling moment of his life. Forrester's dash and determination drove back the enemy and, for the moment, rescued a critical situation. He was awarded an immediate Bar to his MC.

Michael Forrester was born in Portsmouth on August 31 1917 and educated at Haileybury, where he played for the first XV. He later played rugby for the Army and for Hampshire. He was granted a commission as a Supplementary Reserve officer in the QRR, and this was converted into a regular commission in 1938.

After being evacuated from Crete, Forrester attended the Staff College, Haifa, and was then appointed brigade major of 132 Infantry Brigade. He was wounded at the Battle of Alamein and mentioned in dispatches in 1942. Postings to HQ 13 Corps in Syria and then to HQ 18th Army Group in Algeria were followed by his appointment as second-in-command of 1/6th Battalion QRR for the final stage of the North Africa campaign.

In August 1943, aged 26, Forrester took command of his battalion, which formed part of 131 (Queen's) Lorried Infantry Brigade, 7th Armoured Division. The next month he came ashore at Salerno, and after the break-out from the beachhead led his battalion through the Vietri Pass to capture intact the strategically important bridge at Scafati over the River Sarno. He contended successfully with very difficult terrain, enemy demolitions and determined counter-attacks. In the citation for Forrester's immediate DSO in 1944, his CO stated: "I have not seen a better run battle or one which was so influenced by the personality of one man."

Forrester and his battalion subsequently returned to England to prepare for the campaign in north-west Europe and landed in Normandy shortly after D-Day. On June 16 1944 they were holding the village of Briquessard when they came under two fierce attacks by Panzer-Grenadiers.

At one point his battalion HQ was in danger of being overwhelmed. In spite of the confusion this caused and the intense small arms fire, Forrester calmly withdrew his HQ without loss. Continually moving among his men, despite being exhausted, he encouraged them to beat off the attacks and, having inflicted considerable casualties on the enemy, he moved his HQ back to its original area. He was awarded an immediate Bar to his DSO.

Following a posting as MA to the British Joint Services Mission in Washington, he joined 2nd Battalion, Parachute Regiment as a company commander in 1950, serving in Cyprus and the Canal Zone. In 1953 he moved to the Staff College, Camberley, as an instructor and then to GHQ as GSO1 in Kenya during the Mau Mau insurgency. Forrester was transferred to the Parachute Regiment in 1957 upon taking command of the 3rd Battalion.

In retirement, Forrester lived in Hampshire. A keen conservationist, he enjoyed gardening and ornithology. He was a member of the Winchester Diocesan Synod (1988-91); lay co-chairman of the Alton Deanery Synod (1984-88); and vice-president of the UK Crete Veterans' Association (from 1993). 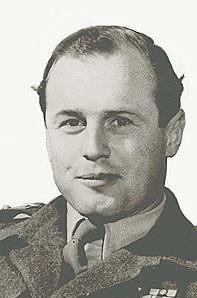