Private Martin George Bell was born on 13 October 1986. He attended the Saits Grammar School in Shipley. However, his home town was Bradford. Before he joined the Army, Private Bell was a Police Community Support Officer.

He completed his basic training on 17 April 2009 and was posted to 1st Battalion The Parachute Regiment. He came to the 2nd Battalion in July 2010, just prior to the Battalion's deployment to Afghanistan. Private Bell shone in C (Bruneval) Company. He was excellent throughout the Mission Specific Training package and was utterly professional throughout his time in Afghanistan. He was immensely popular and well respected by all ranks. Private Bell had a bright future ahead of him and had been clearly identified as a rising star.

Private Bell deployed to Afghanistan on 14 October 2010 with C (Bruneval) Company, 2nd Battalion The Parachute Regiment. He was based in Patrol Base 2 in the Nahr-e-Saraj District of Helmand Province. On 25 January 2011 he deployed with his Multiple to Spoor Kalay, a small village North of Patrol Base 2. His mission was to interdict insurgent forces along known infiltration routes and prevent them from both attacking the Afghan National Army and intimidating the local population. At 0825hrs Private Bell was fatally wounded by an Improvised Explosive Device as he moved to assist a comrade injured by a separate device.

He leaves behind his parents Simon and Elaine and his brothers Oliver and Philip.

In the Operational Honours and Awards List of 30 September 2011, Private Bell was posthumously awarded the George Medal.

George Medal for paratrooper who risked life in minefield to rescue wounded comrade. 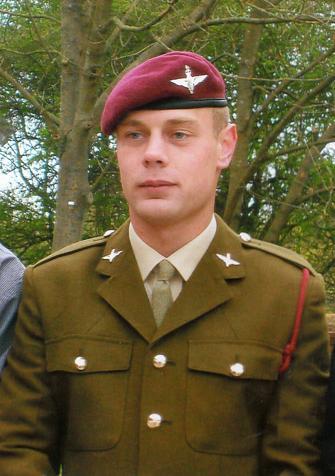 Malcolm Rowlands said:
Farewell Martin Bell. It pains us so deeply that your life was all too brief. But you made your mark as the very finest of airborne brothers and we are all incredibly proud of you. Rest in peace.
Malcolm Rowlands (ex 1 Para)
Secretary
West Berkshire Parachute Regimental Association
David Shearwood said:
On behalf of British Airborne Forces Victoria Australia we wish to express our sincere condolences to Martin's parents of yet another sad loss of another young Brotherhood
warrior.Rest in peace mate.
Dave Shearwood
Secretary
BAFA
Add your comment