Leslie Sadler was the son of David and Dorothy Sadler, and husband of M A Sadler, of Balsall Heath, Staffordshire. He served in The Royal Warwickshire Regiment, prior to volunteering for airborne forces in 1943.

He attended parachute course No 71, which ran at RAF Ringway in July 1943, after completion of training at Hardwick Hall. His parachute jump instructor’s comments: “Good all round man – should do well”.

Upon completion of the course he was posted to the Holding Company and then to 9 Platoon, C Company, 2nd Parachute Battalion in North Africa.

His first ‘taste’ of active service was on Operation Slapstick, the landing at the port of Taranto in Southern Italy, by the 1st Airborne Division from a naval task-force in September 1943. The 2nd Parachute Battalion was part of the 1st Parachute Brigade, which was in the second ‘wave’, and tasked with clearing the town of Altamura of German forces. However, the enemy withdrew before they got there and they were ordered to halt in that area. In late October they were moved to Barletta, before embarking for return to the UK in December.

From January to September 1944, C Company were billeted in Lincolnshire, at Hungerton Hall, near Grantham. By September 1944 Private Sadler was the batman to Lieutenant MP ‘Peter’ Barry, the commander of 9 Platoon, C Company. On Sunday, 17 September he emplaned on a Dakota at Barkston Heath airfield for Operation Market Garden and flew to DZ X near Heelsum in Holland.

From there they advanced along the river road, route ‘LION’, and then peeled off from the battalion column to attack and capture the railway bridge. Led by Lieutenant Barry the lead section moved onto the bridge itself, but it was blown-up before they could cross to the other side. During the withdrawal Lieutenant Barry was wounded, an extract from his own account reads:

“I was in front and the next thing I knew a bullet smashed into my right arm. It made a small hole in front and a large gash coming out. Of course I know today it fractured the humerus. I had no idea what it had done then, but my arm suddenly began going round and round in a circle. I wondered what the devil was causing it to do that. At any rate, we couldn’t afford to remain where we were much longer. I stood up and shouted that we were going back and we retreated back across the bridge. Near the first pillar was a small ladder going down the side to the river. We went down that and I set the section to firing on the opposite bank. We still couldn’t see anything, but apparently, we could still be seen. One of the section, a Pte Sadler (nb unsure of spelling) was killed. About that time, a runner came up and told me we were ordered to move back. I was carried back on a stretcher, with my arm strapped to my side, and taken to a house in Oosterbeek [Breman house?], while the rest of the Company went on into Arnhem”.

Private Leslie Sadler is recorded as having been killed at Arnhem on 25 September 1944. Yet his Company Commander, Major Victor Dover, remembers him in his book, ‘The Silken Canopy’, as having been shot in the head by a sniper as he was about to deliver a message to him after the railway bridge had been demolished on Sunday, 17 September.

“The Polderweg along which we made our way was little more than a track. There was no cover and we were exposed to fire from the far side of the river. Number 9 Platoon was in the lead, followed by Company HQ and 8 and 7 Platoons. The German positions in a brick kiln on the north side of the buildings had been demolished. The opposition to our approach was light and was quickly overrun. 9 Platoon continued its advance of the escarpment of the railway bridge without trouble until they reached the foot of the escarpment of the railway track itself. Here it came under heavy fire from a machine-gun and from snipers on the far side of the river. The remainder of the Company took up covering fire positions in the area of the wrecked buildings. Lieut. Peter Barry, the Platoon Commander, deployed two sections on the ground to give close covering fire while he with the third section climbed up to the bridge under cover of smoke. It was a model attack and all seemed to be going well. Our covering fire silenced the opposition on the far bank. Peter with his assaulting section reached the first span of the bridge and started to cross. When they were a third of the way over there was a yellow flash and a tremendous explosion. The Spreng-Kommando and his henchmen could be seen running from the far side of the bridge, and they only just made it before the centre span sank into the river with the railway lines draping down like reeds into the water. From my position at Company HQ I could see Peter’s men on the bridge running back, dragging two of the section with them. There was no wireless communication, so I had to go forward on foot with my batman to find out how badly the section had been hit and if there was any chance of crossing the river by other means than the bridge. As we arrived at the escarpment, Private Sadler of 9 Platoon came down the embankment towards us. He did not deliver his message: he dropped dead from a sniper’s bullet before he reached us.”

Pte Sadler was the only member of 9 Platoon killed. During the battle, C Company had 7 killed, and 2 Para 61 killed, and a total of 210 wounded. Only 17 soldiers in the 2nd Para Bn escaped.

Pte Sadler died aged 20 years and has no known grave. He is commemorated on the Groesbeek Memorial, Netherlands. 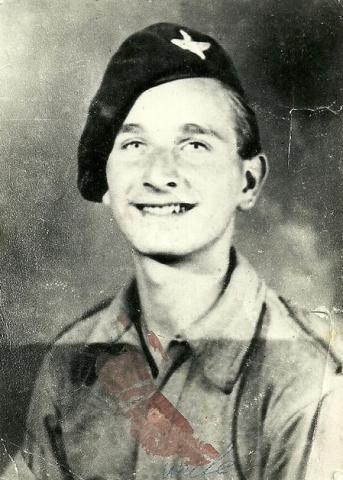