Ken volunteered in 1941 a few days after his 18th birthday, signing up in his home town of Bournemouth. He joined the 2nd Ox & Bucks Light Infantry. His training took him to Oxford, Brize Norton, Bangor, Belfast and Strabane.

He saw his first action on D-Day, June 6th 1944. He landed by glider beyond Sword Beach and was soon involved in an action to rescue men cornered by a tank for which his commander, William Bousfield, received the Military Cross. He spent about 3 months around Caen mainly in a ditch/trench being shelled at in the extended grounds of the Chateau St Come.

On Christmas Day 1944, he was sent to the Ardennes for the Battle of the Bulge where he came face to face with a Tiger Tank. Here he was hospitalised with frostbite.

On 24 March 1945 he landed via glider at the German town of Hamminkeln as part of the Crossing of the Rhine but the town was not empty; machine gunners had positioned themselves in the houses and buildings. Out of 750 men in his battalion, the official report shows 62% were either killed or wounded within the first 10 minutes of landing.

He was then instructed to get to Wismar, on the Baltic Sea, to help stop the Russians moving further westwards.

After VE Day he was due to be sent to Japan but when the atomic bombs were dropped he was diverted to Palestine where life was a whole lot easier, although he did have to help guard the King David's Hotel in Jerusalem which was the target of a major terrorist attack. In March 2016 he received the Legion d'honneur. He and Val were married for 63 years. He died peacefully at home in Cornwall with his family by his side. 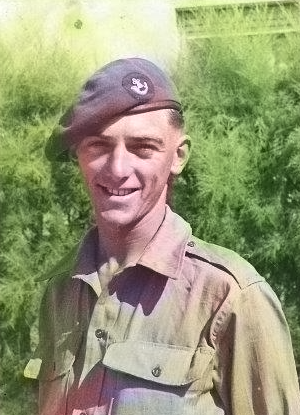 Philip Angell said:
World you look at his picture and you see a man.

I look at the man and see My World.

My much loved husband.