As the Battle progressed, field reinforcements of the Divisional position were essential, and during the Battle Sglmn Moncrief was attached to 156 Parachute Battalion. It was under the authority of 156 Battalion that Joseph Moncrief would later be cited for a Military Medal in recognition of his actions. The citation text from Maj GS Powell read:

'This man was attached to 156 Battalion Parachute Regiment, from 22-25 September 1944. During this period he displayed qualities of extreme gallantry under fire, on uncounted occasions volunterred to carrying messages under fire to Bde HQ, guiding officers and carrying up stores.

When not carrying out his duties as signaller he volunteered to undertake any work on hand including sniping enemy positions 100 yards away from an exposed position. His courage and coolness were an example to all.'

Though ultimately unsuccessful, the citation is an example of his and many other individual actions at Arnhem which may have passed without official recognition.

Soon afterwards the Division was evacuated across the Rhine on the night of 25-26 September 1944, and Sglmn Moncrief managed to escape safely across the River.

After the end of the war, Ebbie left the Army and returned to a civilian career. He set up home in Lerwick, Scotland where he still lives today. 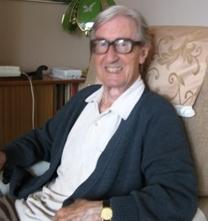 Richard Hamilton said:
I spoke with Joseph Moncrief today. He remembers being told that he had been recommended for a 'gong' but never heard any more about it. He was very pleased when I read out the form signed by Maj Powell. Now 88 years-old, Ebbie is fit and well. Recently widowed, he has lived in Lerwick since he returned from war service in 1946.
Richard Hamilton said:
Joseph Moncrieff celebrated his 90th birthday in June 2012. He tells me that during WW2 he was called "Monty"; no connection or otherwise to FM Montgomery, just an abbreviation of his surname.
Add your comment