John Thomas Richards enlisted into the Territorial Army in May 1939 and was embodied into the Royal Welsh Fusiliers (RWF) at the outbreak of the Second World War later that year.

He was serving as a Lance Sergeant with the 10th Battalion, The Royal Welch Fusiliers, when it was turned over to a parachute infantry role, and redesignated as 6th (Royal Welch) Parachute Battalion in 1942. Ten officers and 222 other ranks from the RWF subsequently attended RAF Ringway for parachute training on course 23, which ran from 17 to 23 August 1942 , along with 44 volunteers. Thirty seven RWF personnel did not complete the course - this included one fatality.

'Jack' Richards later transferred as a reinforcement to 1st Parachute Battalion  and served with the battalion as a platoon sergeant in 11 Platoon during Operation Market Garden in September 1944.

He took command of the platoon at Arnhem when his officer was wounded and was later awarded a Military Medal and a Commander in Chief's Certificate for his Gallantry. The citation for the former reads:

'On the 18th Sept 1944 at Arnhem, Sgt Richards took over command of a platoon after his officer had been severely wounded in both legs. His first action was to go forward under heavy fire and drag his officer to safety - he was exposed to enemy fire in open ground for nearly twenty minutes.

In one attack on a factory he himself crawled forward and threw a grenade into a window and then put smoke down. The platoon were able to advance and secure the factory, fire from which had been stopping the battalion's advance. Later, in the last attack the battalion carried out he led the remnants of his platoon through dug in positions of the enemy to capture an intermediate objective. Here he held on until there were only three survivors of his platoon left alive.

His courage had been beyond praise, and his contempt of danger was largely responsible for the momentum of the attack going forward.'

He was captured by the Germans later during the battle and held as a Prisoner of War.

Compiled by Wendy George with assistance from Mark Hickman 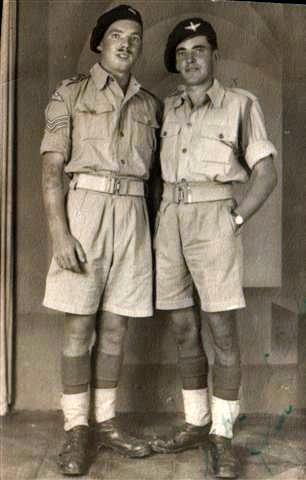