Private John Shannon, son of John and Lilian Shannon, of Paisley, Renfrewshire, worked in a cotton mill before he enlisted into the General Service Corps in June 1944. In November 1944 he transferred to The Argyll and Sutherland Highlanders. Shortly afterwards in February 1945 he volunteered for airborne forces and served with the Defence Platoon of HQ 1st Airborne Division.

Pte Shannon was amongst the troops sent to Norway as part of Op Doomsday to keep order and disarm the German forces in the region.

On 10 May 1945 Short Stirling, LK297, l9-G took off from RAF Great Dunmow at 0355 hours, bound for Gardermoen airfield in Norway. The aircraft crashed at Andtjernâsen, ten miles north of Oslo, plowed down the hillside and exploded. The weather conditions at the time were terrible, with thick fog and rain compounding problems created by the poor signal from the Eureka beacon at Gardermoen. The crash killed all on board, including the six crew members, Air Vice-Marshal J R Scarlett-Streatfield, and 17 members of the British 1st Airborne Division, who were being transported to Oslo as part of Operation Doomsday.

The aircraft was not found until 21 June 1945, when soon afterwards they were buried at Vestre Gravlund in Oslo. In 1995 a large memorial marker was raised at the crash site.

Compiled with assistance from Phil Jennett and John Shannon 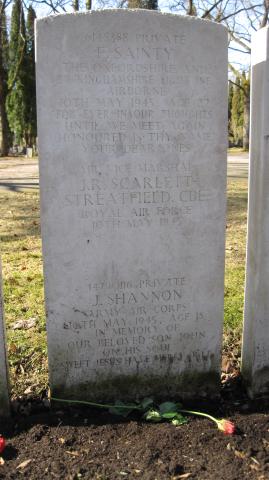