John Dobson joined the West Yorkshire Regiment as part of his National Service in 1952. After basic training he volunteered for the Parachute Regiment and served with them until 1954 reaching the rank of corporal.

He recalled an accident during training,  when one of the recruits came out of the balloon basket unhooked and fell to his death with the parachute still unopened. During his service with the Regiment he spent time with the parachute balloon training unit based at RAF Cardington and travelled all over the country providing parachute training to Territorial Army units.

On one occasion someone, who shall remain nameless although never forgotten, dipped the clutch on the winch for the balloon while John was holding the ground rope and before you could wind your watch he was looking down on the roof of the hangers at Cardington - needless to say holding on for grim death! He was winched down and no doubt had some kind words for the fellow in the winch truck.

John formed part of a Depot contingent which participated in the coronation proceedings of HM Queen Elizabeth II in 1953.

In 1954 he was posted to Moascar garrison in Egypt with the 2nd Battalion for a few month before being returned back to the UK for discharge. He remembers the locals taking pot shots over the fence amongst other things. While swimming in the bitter lakes he stepped on an unknown creature in the water, which stung him in the foot leaving a round impression with two puncture wounds. Within a short time his foot swelled and later it affected his lips and face.

The residual symptoms continued for many years afterwards. John sought treatment a few years later at the Bradford Royal Infirmary where coincidentally the doctor was an Egyptian from Ismailia. The doctor told John that these bites were often fatal for the locals. John attributed his survival to the fact that, in typical army fashion, he was given two doses of tropical injections within 5 days due to paperwork errors!

On completing National Service he was transferred to part time service with  the Territitorial Army (TA) with a Royal Corps of Transport unit  in Southern England. He later transfered to a Royal Engineers TA unit, 272 Field Support Squadron RE, based at Bellevue Barracks in Bradford West Yorkshire.

While in the RE, John went to Cyprus in the early 70s and recalls the Russian spy trawlers cutting in and imitating one of the Signal's senior NCOs almost flawlessly. The said NCO was stood right behind John while he was talking to the Russian!. John also went to Canada for 2 months with the TA seconded  to a regular unit on Exercise, which was subsequently featured in the TAVR magazine in 1974.

He resigned from the TA in 1975 having reached the rank of Staff Sergeant and emigrated with his family to Canada, where he  worked for Alberta Government Telephones as a cable splicer.

Profile photograph taken while serving as a Private with the Parachute Regiment. 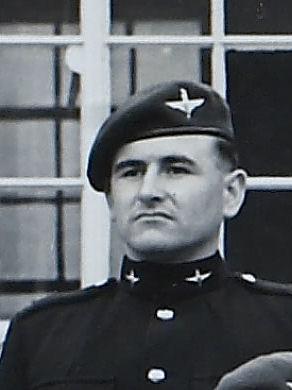