John Clifford Lord was born on the 26th April 1908 in Southport, Lancashire. He joined the Grenadier Guards in March 1933 for a four year engagement. During a posting to Egypt he played rugby for the United Services and was promoted to Lance Sergeant. On discharge he joined the Brighton Police Force before being recalled to the Army at the outbreak of war in 1939. He was posted to the OCTU at Sandhurst as Sergeant Instructor, before being promoted to CSM of the Cadet Company. He remained at Sandhurst until October 1941, when on the formation of the 3rd Parachute Battalion he was posted to become its first RSM. He undertook his parachute training at RAF Ringway, qualifying on the 30 November 1941.

He accompanied his Battalion to Tunisia in 1942 and took part in the attack on Primosole in Sicily on the night of the 13 July 1943. Having been part of the seaborne operation to land at Taranto Harbour between the 12 and 14 September 1943, he returned to the UK with other members of the 1st Parachute Brigade. On returning to the UK, his unit set up camp at Limehurst, Spalding, Lincolnshire.

On 17 September 1944, the Battalion dropped at part of Operation Market Garden. On the 21 September, RSM Lord was captured having been wounded and sent to Stalag XIB where he took control of the camp. Conditions in the camp were poor but RSM Lord set about maintaining military discipline and boosting morale within the camp. On liberation of the camp on the 27 April 1945, Major Ralph Cobbold of the Coldstream Guards described finding a guard with a maroon beret and “thought that the 6th Airborne Division must somehow have got there first”. On enquiring to the guard commander when they had arrived, he received the reply “Just after Arnhem, Sir”. He goes on, “then a majestic figure appeared, the RSM himself, with gleaming brass, immaculate webbing, razor-edged trouser creases, dazzling boots, a spectacular salute;. On reviewing the camp they were impressed that despite poor conditions, overcrowding and undernourishment, the camp was well ordered and run with military efficiency.

During his imprisonment RSM Lord had been offered the chance to move to an NCOs’ camp where conditions were better but had refused in order to lead his men. Towards the end of his imprisonment, men were being marched off. RSM Lord hid underneath the floorboards for five days, being fed through a hole while guards searched for him. When he emerged he continued his leadership of the Stalag until he could hand over to the advancing British Army. At liberation, he stayed until all his men had been evacuated back to Britain.

For his excellent service during the war and his outstanding leadership in Stalag XIB, he was made a Member of the British Empire.The recommendation for his award records:

"RSM Lord joined the 3rd Battalion The Parachute Regiment as RSM on its first formation in September 1941, and held this appointment until he was wounded and captured at Arnhem in September 1944. During this period he has earned himself a great reputation in his Battalion and in the 1st Parachute Brigade. At the beginning it was largely due to this Warrant Officer's drive and character that men from over fifty different Regiments were soon welded into a first class Battalion with a fine Esprit de Corps. RSM Lord served with distinction throughout the North African campaign in the winter of 1942/1943 and his gallantry in action was always an example to the Battalion. During a difficult period which followed, caused by certain changes in command, it was largely due to this Warrant Officer's unswerving loyalty and devotion to duty that the Battalion was unaffected. Later, he fought with gallantry in Sicily and at Arnhem, where he was wounded and taken prisoner. Ultimately he was sent to Stalag XIB where he soon showed himself to be the outstanding personality of the Camp and where he did fine work in maintaining a high state of morale amongst the prisoners. Officers and men arriving at the Camp were astonished by the excellent bearing and turnout of the prisoners. RSM Lord has served under my command almost continuously since the formation of the 1st Parachute Brigade, and during this time, he has shown a standard of loyalty, drive and devotion to duty which it would be hard to equal."

Following a period of leave he was posted to the No 1 (PR) Infantry Training Centre as RSM before joining the new Royal Military Academy Sandhurst as RSM, New College in August 1947. In July 1948 he became the RSM of the Academy until December 1960, when his post was upgraded to Academy Sergeant Major.

His status was such that he was made the subject of a 'This is Your Life' programme compered by Eamonn Andrews and aired on 30 November 1959.

He retired in August 1963 having held the rank of Warrant Officer Class 1 for 22 years, as the senior RSM in the British Army. It was widely rumoured by his sub-ordinates that his initials, JC stood for Jesus Christ. On the 8 June 1963 he was appointed an MVO (5th Class).

He died at his home in Camberley on the 21 January 1968. His medal set can be seen at the Airborne Assault Museum.

With assistance from Bob Hilton. 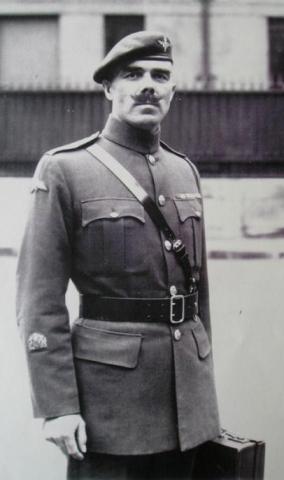 Anthony Costello said:
The further reading to which you refer:
"To Revel in God's Sunshine".. The author, Richard Alford was at the Airborne Forces Depot when RSM J.C. Lord served there. Richard is also a member of the Palestine Veterans Association having been in Nahariya with the 3rd Bn. Parachute Regiment in 1947.
Add your comment