John served with 16 Para Heavy Drop Coy when the Coy was based as RAF Station Hullavington, near Chippenham in Wiltshire. During his time with Airborne Forces he took part in a deployment to Northern Ireland in 1974.

John is still in contact with many ex-Heavy Drop lads: "We all agree that Heavy Drop was our best post - fond memories never forgotten".

He now runs a website with military content, with a special section on the Heavy Drop Coy with photos, links and other details. He is currently researching for archive footage of the Heavy Drop Coy (with some success!) but is always on the look out for more. 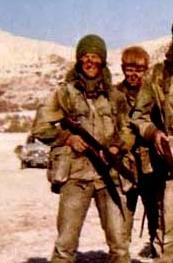