James Bell served as an ARP Warden prior to enlisting into the Army on 5 December 1940.

He served with the Royal Army Service Corps and records suggest he was with 250 Airborne Light Composite Company by the time it embarked for North Africa for further supply training in May 1943. He took part in resupply operations in Italy in 1943 returning to the UK in December 1943.

He was tasked to deploy with the unit to support the divisional assault to capture the Rhine crossings at Arnhem as part of Operation Market Garden. Problems with the glider meant that he did not land at Arnhem, however his records show that he did serve in France, Belgium and Holland supporting the allied advance into mainland Europe.

After a brief spell back in the UK, James took part with 250 Coy in Operation Doomsday, helping to disarm German occupation forces. He returned to the UK in September 1945 and was demoblised at the end of November 1945 shortly before the unit was formally disbanded.

Compiled by Harvey Grenville with the kind assistance of Mike Bell. 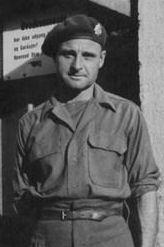