Brigadier 'Hamish' McGregor was educated at Wellington College and then The Royal Military Academy Sandhurst (RMAS). He was commissioned into The Parachute Regiment in August 1963.

In 1964 he joined 1 PARA in Cyprus and was present when the UN Force was formed.  As part of 1 PARA in 1965 he carried out operational tours in the Radfan and was also attached to the Sultan's Armed Forces in Oman.

He was awarded the Military Cross for his actions while serving with 1 PARA in Aden in 1967. The citation from the London Gazette, dated 23 January 1968, records:
"Lieutenant McGregor was the Commander of a detachment of the Mortar Platoon, First Battalion, The Parachute Regiment, which was due to take over duties in the observation post in the tower of Sheikh Othman Police Station on 7th September 1967. As there was to be a general strike on that day, the detachment was ordered to its task twelve hours early at short notice. At 2200 hours, when the detachment arrived at the Police 'Station, the observation post was under spasmodic fire, which continued throughout the night. At first light the enemy fire became both heavy and accurate. Four times armoured cars had to be deployed to relieve the pressure, and restore the fire initiative.

During the day Lieutenant McGregor displayed great coolness and leadership. His professional skill, fire control and observation was an inspiration to all his men. On 9th September 1967, Lieutenant McGregor was still with his detachment in the Police Station, when intense interactional fighting broke out. For long periods of time the observation post was in crossfire of small arms, rockets, and mortars, and the security of the garrison of the Police Station gave grounds for concern.

Under Lieutenant McGregor's leadership his men maintained an extremely high standard of alertness and observation, and their reading of the situation provided much valuable information, which was gained often under heavy fire.

During 9th-llth September 1967, Lieutenant McGregor worked in very close liaison with the Civil Police in the preparation and production of a peace broadcast, which eventually led to a cease fire. He then volunteered to remain in the Police Station so as to make best use of the liaison, which he had set up. .during his stay, as another general strike had been called for on 12th September 1967.

From 6th September until he was relieved on the night llth-12th September, Lieutenant McGregor handled the situation with skill, firmness, tact and enthusiasm. During the first thirty-six hours his coolness, control and professional skill set a fine example under heavy fire. At no time did he show anything other than complete confidence, and his actions throughout showed a clear understanding of the military and political situations.

Lieutenant McGregor's leadership, encouragement and the discipline of his men did much to maintain the morale and loyally of the Civil Police at a very difficult time."

Tours at Depot The Parachute Regiment, NCOs Tactical Wing at Brecon and as Adjutant of 15 PARA in Glasgow then followed before he rejoined 1 PARA at Palace Barracks in Northern Ireland, where he remained for nearly two years.

After  commanding Recruit Company in the Depot, he then attended Staff College at Camberley in 1976 and was subsequently posted to the MOD.  On his next posting, he  commanded a Company of 3 PARA in Osnabruck before a spell at RMAS as the Chief Instructor of Old College.

He later became Commanding Officer of 4 PARA from 1982 to 1985 and was then posted to the Commonwealth Training Team in Ghana for two and a half years. A short tour in the School of Infantry preceded his appointment as Regimental Colonel at PARA RHQ from 1988 to 1991.

Promoted to Brigadier in 1993 he became the Commander of the British Military Mission in Kuwait and retired from the Army in May 1998. 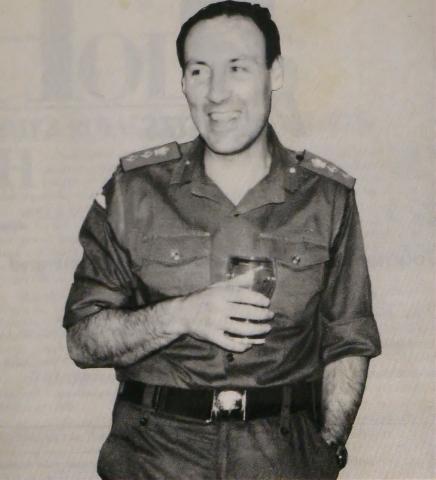