Ian Fenwick was born in September 1910 in Malmesbury, Wiltshire, the son of Captain Charles Harry Fenwick of the 60th Rifles, who had married an American socialite called Lilian Everett from Newport, Rhode Island.  Ian’s father, who was known as Harry, had achieved fame, of a sort, by owning Why Not, which won the Grand National at Aintree in 1894.

Ian was an excellent sportsman and played for Winchester College's 1st XI in 1929.  Ian then went up to Pembroke College, Cambridge, and then to art college in Berlin.

He was busy as an artist during the 1930s.  His drawings appeared in many magazines, including Punch, Men Only, and London Opinion. His books, and books he illustrated, included: Pick-Me-Up, Songs of a Sub-man, The Bed Book, Weepings and Wailings, I’m Telling You When and Where to Winter Sport, Start Early, Car Canny and  Enter Trubshaw (a posthumous collection of Ian’s drawings).

Ian was commissioned as a Second Lieutenant in the Leicestershire Yeomanry on 20 February 1937, after reaching the rank of Lance Corporal whilst serving with the Cadets of the Winchester College Contingent, Junior Division Officer Training Corps.

With the re-organisation of the Army in early 1940 the Leicestershire Yeomanry became an artillery regiment. Consequently Second Lieutenant Fenwick was transferred to the Royal Artillery on 15 February 1940.

He was then transferred from the Royal Artillery to the King’s Royal Rifle Corps on 30 June 1940 and then seconded to 'a specialist appointment' at Coleshill with the rank of Captain. After training, he was posted to Somerset as Intelligence Officer where his charismatic leadership established the country’s second largest number of Auxiliary Units, trained in insurgency in the event of German invasion, building up to 300 men in 44 patrols working out of 50 secret Operational Bases.

Ian then served in the Middle East, the North African desert campaign right through to Tunisia and then took part in the invasion of Sicily/Italy. He probably served with the 2nd Battalion, the King’s Royal Rifle Corps.

Upon returning to the United Kingdom, in 1943, he volunteered for airborne forces and was transferred to The Army Air Corps, The Parachute Regiment, on 1 September 1943. He qualified as a parachutist at RAF Ringway on course number 87, 13 to 25 October 1943. Upon completion he was posted to the Depot & School Airborne Forces at Hardwick Hall, Near Chesterfield. His instructors comments:

Ian then joined the Special Air Service in February 1944, while serving as a Captain.  A few months later, as commander of “D” Squadron, 1st SAS, in Operation Gain, and holding the rank of Major, he parachuted into France on the night of 16/17 June 1944, with some 60 men in the vicinity of Orleans, together with a number of Jeeps. This was just shortly after the Normandy landing, but well over a hundred miles behind enemy lines. Their job was to disrupt enemy communications, they proceeded to do just that, blowing up railway lines and, working with the French Resistance, derailing many trains. After another successful night attack on a train carrying troops and ammunition Ian reported that, “We are happy in our work.” By the end of Operation Gain, 16 railway lines had been put out of action and two locomotives and 46 trucks destroyed.

However, on 7 August, 1944, their operating base was surrounded by some 600 German soldiers as a result of intelligence they had gathered from a double agent. The base party was successful in breaking out, while Ian was out on an operational patrol at the time, but returned to assist in the withdrawal. A fellow officer wrote:

“It was typical of him that his first thought should be for the safety of his men. It was in an attempt to relieve them immediately that, after successfully attacking an enemy column, he was ambushed in his jeep and killed instantaneously. Thus died a very gallant Englishman”.

But there is more to the story than that. A fuller account suggests that Ian had been informed – wrongly – that his men had been killed, and that as he was headed to join up with another group under the command of Captain Jock Riding, his Jeep was seen by a German spotter plane, which radioed his whereabout to the SS troops on the ground.  The Germans set up an ambush for him near Chambon.  An elderly French woman, it is said,  stopped his Jeep and warned him of the ambush.  Ian, perhaps still enraged by the news of his men’s fate, is supposed to have said, “Thank you, Madame, but I intend to attack them”, and proceded to do just that, with all guns blazing.  They nearly succeeded, but Ian, who was driving, was shot through the forehead.  Of the others in the Jeep, Lance-Corporal Albert Menginou of the French Resistance was also killed, and Corporals Duffy and Dunkley were captured.  Dunkley was executed by the the Germans the next day; Duffy escaped.

Major Ian Fenwick was killed in action on 7 August 1944, aged 33, and is buried at the cemetry at Chambon-La-Foret Communal Cemetery, France, Plot D, Grave 1.

A vast amount of cartoons depicting the Paras have been drawn over the years.  On the right you will see a collection of these cartoons deemed suitable for the public eye. 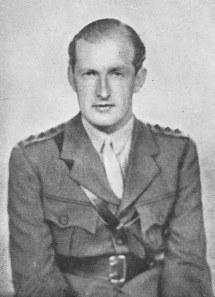