Herbert “Nobby” Arnold was born into a family of ten in April 1927, left school at the age of 11, and did odd jobs ranging from baker to truck driver. Enlisting in the Army in 1945, aged 18 years, he served with the Army Air Corps in Palestine before returning to civilian life to compete as a professional boxer. Two years later he rejoined the Colours with an appointment in the 1st Battalion, Parachute Regiment, and served in the Canal Zone in the early 1950s, followed by Cyprus and Suez.

A strict disciplinarian, he went on to serve as a Drill and Weapons Instructor at the R.M.A. Sandhurst. Serving under RSM J C Lord. He returned to regular regimental duty as a C.S.M. in time for the Radfan operations

In 1964 he was promoted to the rank of WO 2nd Class. He served in Radfan alongside 45 Commando and Federal Troops.

Before he left the Parachute Regiment on 15 July 1973, he had attained the rank of WO 1st Class and became an RSM to 3 PARA.

“Nobby” Arnold, who also gained fame for placing his pace-stick under close arrest, died at Worthing in July 2001: his funeral was attended by over 300 people, among them Field Marshal Sir Roland Gibbs and his old Radfan C.O., General Sir Anthony Farrar-Hockley. 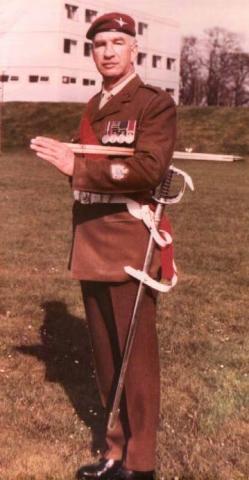 Chris Plenty said:
If you met him, you will always remember him.
Add your comment