In the early part of the war before joining the military Hadyn was in the GPO, and spent some time helping install GPO telephone systems on American airfields in East Anglia. During his military service Gnr Jones trained as a radio operator.

After successful completion of his parachute training, Gunner Jones served with 1st Airlanding Anti-Tank Battery, Royal Artillery. He was on parachute training course 153 at RAF Ringway. It was noted that he had "Good control during descents. Goodworker, very cheerful and confident."

Gnr Jones saw action at Arnhem (Op Market Garden), Norway (Op Doomsday) and then in Palestine, before being demobilised back to his reserved occupation as a GPO linesman.

After the war he served in the TA as 'airborne artillery' before finally probably leaving the TA as a sergeant in 1958 after a military parachuting accident. 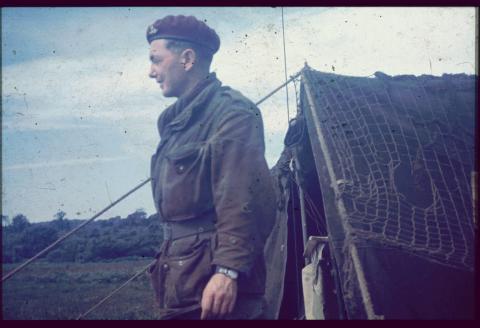