Godfrey Rowland Burt was born in Netley Hospital on 15 October 1932 where his parents lived in married quarters.

His father Gabriel served in the RAMC in the First World War and then worked in the Mortuary Department of Netley Hospital for the remainder of his working career. His mother Phyllis was a nurse with the Red Cross. Godfrey had an older sister and 2 older brothers, now all deceased.

The family moved to Thornhill, outside Southampton, and bought their first home which they named “Rowland” after Godfrey who was a very unwell baby.
Godfrey went to school in West End and Hedge End, Southampton during the war years where he spent much of his time swapping the daily paper and eggs from his chickens for tinned food and sweets from the various mobility troops who were in huge camps in the area awaiting deployment to other locations.

On leaving school at the age of 14 Godfrey mentioned to his father that he would like to join the Army and found himself at the recruiting office shortly after.
In February 1947 Godfrey joined the Apprentice College at Arborfield and trained asan Armourer. As he was only 4 ft 9 in tall and very light he joined the boxing team andthe choir (until his voice broke).

On leaving Arborfield he joined an inspection team checking mounds of weapons due to be sent to Korea. He later joined the Welch Regiment to go to Korea but as he was under 18 the posting was rescinded, so he took a parachute course and ended up in Egypt with the Mountain Pioneer Corps. He was soon claimed by 1 Para where the whole Parachute Brigade was in the Canal Zone.

Here he carried on boxing and also took up athletics and cross-country and it was not long before he transferred from the REME to the Parachute Regiment.
By this time he had changed from Godfrey to Gordon and has since then always been known as Gordon to his colleagues and Gordie to his loved ones.
He returned to England in 1953.

He emigrated to Canada for a short time and worked for Good Year and the Campbells Soup Company, returning to England about 2 years later.
He rejoined the Parachute Regiment where he resumed his rank of Sergeant with 1 Para. He had postings to Cyprus, Aden (now Yemen), Bahrain, Hong Kong, Anguila and Suez.

He became captain of the Regimental and Army Cross-country Team winning the Army Championships 9 times in succession which is a record still held. He ran the
Ben Nevis Race 4 times, winning it in 1963. He ran for the Army over 30 times and won the Army Steeplechase 4 times.

Gordon was commissioned in 1970 becoming 2IC of the Junior Parachute Company for 3 years. He was then posted to 3 Para and went to Northern Ireland.
He was awarded the Military Cross for Gallant Service and spent the next 2 years of his service gaining further commendations. He then became Training Major in Special Forces and was attached to the Intelligence Corps.

He left the Regular Army in 1981 as a Major after having met Jennifer (nee Williams). They were married in 1982 taking up residence in Wiltshire.
He took up a post as a Permanent Staff Admin Officer with 1 Wessex TA travelling to Bournemouth and Poole for the next 11 years.

During his time with the TA Gordon took the soldiers rock climbing and abseiling in Cornwall each year. He qualified as a Climbing Instructor climbing in Wales, Scotland, The Alps and Cyprus leading the route over Commando Ridge in Cornwall and continued Free Climbing several times up to the age of 62.

Gordon enjoyed his life in Wiltshire with his good neighbours and held summer parties each August. These parties consisted of everyone having fun doing competitive press-ups and trolley rides up and down the lane in a trolley Gordon had built. The Plunger Walks consisted of the men walking along on 2 sink plungers and this was always great fun. Each year Gordon would plan an elaborate April Fools trick on the neighbours – they loved them.

Gordon was a Local Councillor for 15 years and served 2 periods as the Chairman of his local Parish Council. He was also a School Governor at the school his children attended. He did a stint as a Meals-on-Wheels delivery volunteer and found it amusing that many of his clients were younger than he was!
He also qualified as a Club Accountant and became the secretary of various local Working Mens Clubs and Royal British Legions. He also audited the accounts for a
number of clubs and associations.

The 3 children could not escape the climbing wall that Gordon had attached to the side of the house and he said it had prepared them for the climbing they did in Cornwall where the family always joined the TA soldiers during their annual camps at Penhale. The family stayed at a lovely holiday complex while the soldiers were not quite so lucky. During his time with the TA at Bournemouth Gordon had met a fellow officer and ontheir retirement from the TA they regularly went walking together. They walked the Coastal Path, South Downs, in the Brecon Beacons, Snowdon, Andorra and had a memorable 5-week trip to Australia, Hong Kong and Singapore.

Sadly Gordon’s active life was curtailed in 2006 by a triple heart bypass and a heart valve replacement – he loved telling everyone that he now had a pig’s valve in him. He then had a hip replacement in 2009. Following all this he still enjoyed life. He loved his garden and re-designed it almost every year. He drew up the plans for
both the extensions on the family home. He enjoyed DIY and made dolls cots and dolls prams for his 2 daughters and garages and toy boxes for his son. He made a
huge dolls house which he modelled on the family home but it was too big to fit anywhere in the house!

Gordon always kept himself fit and was still running into his 60s. He used to beat his younger daughter when out running with her and she was running for the County at the time. He was very competitive in everything he did.

He became a Roman Catholic in 2019 and took his faith very seriously. He would read his prayer book every morning and attend Mass each week with Jen.
He was very proud to give his daughter away on her marriage in the church attended by the family which was followed by a wonderful wedding reception. He was delighted at the birth of his grandson in April 2020 and looked forward to seeing him when lockdown allowed.

The emergency deployment was authorised in order to provide the resident Gurkha battalion with some much-needed respite, and 1 PARA arrived at Kai Tak Airport, Hong Kong on 3 February 1980 in bitter cold. 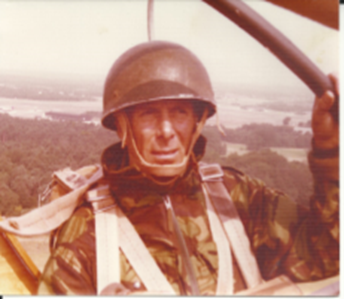