He travelled by glider to take part in the Battle of Arnhem, during Op Market Garden. He was one of the few who escaped as part of Pegasus One at the end of the Battle, which proved a fateful escape.

As the Squadron regrouped, they were finally readied for action and sent to Norway as part of the Operation Doomsday to disarm the German army.

Upon enlisting into the Regular Army on the 16 July 1935 he joined The Loyal Regiment. He was an early volunteer for the 1st Air Landing Company, Reconnaissance Corps, as it was then known. In July 1942 he volunteered to do a ‘full’ parachute course and was sent on course 17 to RAF Ringway, 5 – 13 July 1942. He carried out two parachute descents from a balloon and five from an aircraft to qualify for the full parachutists 'wings'.

In April 1943 he sailed to North Africa and then in September he took part in the unopposed landing at Taranto in Southern Italy. In November 1943 he returned to UK

By the Autumn of 1944 Sergeant George ‘Judd’ Kay was the Senior N.C.O. responsible for the Signals Section in Headquarters Troop, his commander being Lieutenant Freddie Ladds, the Regimental Signals Officer. On Sunday the 17 September 1944 he flew to DZ ‘X’, near Wolfheze, in a 'Dakota' aircraft from Barkston Heath airfield.

He was cut off from the main part of the Squadron during the Sunday and was then wounded in the arm and wrist the next day and taken prisoner.

At the end of the battle all the wounded were rounded up by the Germans for transportation to Germany.

“Not everyone, of course, was wholly committed to the idea of completing the journey into the Fatherland. When it was discovered that each truck had a small opening in the roof, through which it might be possible to squeeze, a number of the prisoners took the opportunity to plan their escape. It was a difficult feat, and meant scrambling up, using arms, legs and elbows but, for the most agile, it was a possibility, and Sergeant Kay, who had been wounded on arrival with the second lift, was one of the Squadron men who escaped in this way. He was later picked up and looked after by a Dutch family, before successfully escaping across the river. Despite his wound, Sgt Kay had fought throughout the battle with another unit and received a well-merited MID for his courage”. [1]

After being wounded during the fighting at Oosterbeek, Holland, on 18th September 1944, Kay was taken to various dressing stations, and six days later he was captured with other wounded. Almost immediately Kay tried to escape into the woods but was caught before he had gone far. He made a similarly abortive attempt the same day. On 26th September 1944 he was entrained at Apeldoorn for transfer to Germany. One of the occupants of the truck succeeded in cutting a hole in the side, thus enabling them to unfasten the door; four men, including Kay, jumped from the rapidly moving train near Teuge. They soon came into the hands of friends and were hidden until their evacuation with other escapers was arranged. Safety was reached on 24 October 1944. 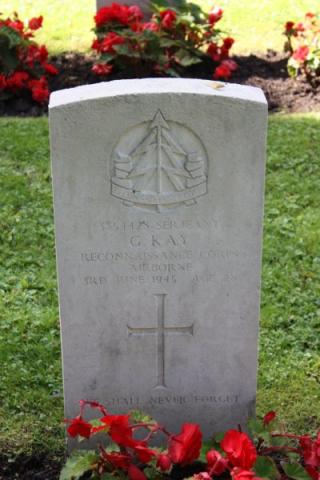