George Harris Lea, was born on the 28th December 1912 at Franche, Kidderminster, Worcestershire, the eldest in the family of two sons and three daughters of George Percy Lea, chairman of the family textile business, and his wife, Jocelyn Clare, née Lea (his mother and father were distant cousins). Educated at Charterhouse School and at the Royal Military College, Sandhurst, he was commissioned, as a Second Lieutenant, into The Lancashire Fusiliers on the 2nd February 1933. Lea was handsome, broad, and tall-well over 6 feet-a robust and skilful games player, but a gentle and considerate man. He served in Britain, China, and India with the Regiment before the Second World War.

Just before the 156 Battalion, and other units of the 4th Parachute Brigade, returned to England, in December 1943, George Lea replaced Major ‘Crackers’ May as the Brigade Major.

Within the 4th Parachute Brigade was the 11th Parachute Battalion. The 11th Battalion had proved to be something of a problem after a series of administrative mishaps, and also the previous commanding officer was not a firm enough man to whip the Battalion into shape. So, on the 2nd July 1944, 1944 he was replaced by George Lea, then Brigade Major, who was promoted to the rank of Lieutenant Colonel. In the coming months he made much progress in bringing the 11th Battalion up to speed.

Lt-Col George Lea and his men arrived in Arnhem on the second day of Operation ‘Market- Garden’. Upon landing, Lea was informed by Brigadier Hackett that the 11th Battalion was to be detached from the Brigade and ordered to advance into Arnhem to assist the 1st Parachute Brigade in their attempt to reach the Bridge. However despite the need for urgency, the Battalion spent several hours outside Divisional HQ until they received orders to move. When the order came, they were skilfully led by some Dutch guides and with their help they avoided a lot of German opposition and met with the 1st Parachute Brigade during Monday night, having only suffered light casualties. Lea arrived at the 1st Parachute Battalion Headquarters at about 02:30 on Tuesday 19th and here he conferred with Lt Col Dobie and Derek McCardie of the 2nd Battalion The South Staffordshire’s. It was decided their attack would commence at 04:00, with the 1st Battalion and South Staffords leading the way, while Lea and his men followed on behind in reserve.

The assault was viciously countered with heavy gun and mortar fire, and continuous tank attacks. Both of the leading battalions were effectively destroyed and George Lea was preparing to move his men in to assist, but at 09:00 a vague order arrived on the radio from Major General Urquhart. Having witnessed the fighting in the area, he decided that the 11th Battalion should not move in to help as it would be an action that would only lead to their unnecessary destruction. Lea ordered his men to hold and it was a further two hours before fresh orders arrived for him. Urquhart now charged the Battalion with the capture of some high ground in the area. It was hoped that with this in their hands, the remainder of the 4th Parachute Brigade would be able to make a successful attack in their direction. Lt Col Lea gathered the remaining men of the South Staffords, now commanded by Major Cain, and instructed them to capture some other high ground to support their attack.

The 11th Battalion was engaged in heavy fighting by this time and it took several hours for Lea to disengage his men from the battle, but they were able to begin moving away by 14:30. Unfortunately the Germans realised their intention and caught the whole battalion out in the open and cut it apart with tanks and mortars. Only 150 men managed to get away from the slaughter, however George Lea was not amongst them. He had been wounded and was captured. He spent the rest of the war in a German prison camp.

After the war in 1946, Lieutenant Colonel Lea commanded the 15th (British) Parachute Battalion, in the Far East, until it was disbanded in December of that year.

In 1948 George Lea married Pamela Elizabeth, daughter of Brigadier Guy Lovett-Tayleur. His wife accompanied him wherever possible and contributed notably to his accomplishments. They had a son and two daughters.

He continued his service with airborne forces in India and at home, and in staff posts with the Royal Marine commando brigade and NATO, as a lieutenant colonel, prior to taking command of the Special Air Service Regiment in 1955. Revived for the emergency in Malaya, the unit lacked direction. Within ten days of his arrival, a sergeant remarked: “the whole outfit came to life. He stretched us-and himself-to the limit, but we could see it was leading to an operational future.” On taking command, he immediately weeded out a number of unsuitable officers and cast his eyes over the operational methods of 22 SAS. During the next two years he developed the exacting standards and extraordinary skills for which the Regiment became renowned and for which he was awarded the Distinguished Service Order.

In the summer of 1955, a Squadron of SAS was raised in New Zealand and after rigorous selection and basic training arrived in Malaya towards the end of the year, where they carried out their parachute course. The total strength of the squadron was 140, a third of whom were Maoris who found it easy to work with the aborigine tribesmen. After a brief shakedown period they went on to make a valuable contribution to the strength. Another squadron was added at the end of 1955, formed from volunteers from the Parachute Regiment where it was known as the Parachute Regiment Squadron and commanded by Major Dudley Coventry. These additions brought the strength of 22 SAS to 560 all ranks, divided into five squadrons each with four troops of sixteen men, plus headquarters personnel and attached specialists.

A normal pattern for a squadron was two months in the jungle, two wild weeks of leave, two weeks retraining and then back to the jungle. There were courses to be taken, new skills to be learned and training was continuous. Lieutenant Colonel Lea instituted additional training for warfare worldwide to secure the SAS a life after the emergency in Malaya ended. By the end of 1955 the back of the Malayan terrorist campaign had been broken and murder of civilians was down to five or six a month. The leadership had fled to Thailand and the policy of rewarding defections had paid off. Low flying aircraft equipped with loudspeakers made tempting offers of money and food. During 1955, the Parachute Regiment Squadron operated in the Ipoh area, hitting the headlines when they killed a woman terrorist, ‘capturing’ her six-month old baby, which they discovered afterwards and then took care of the infant. 1956 and 1957 saw the SAS campaign wound down. The Regiment had played a major role, and at the end of 1956 its official score was 89 terrorists killed and nine captured. The momentum was maintained with patrols that served to maintain the pressure on the remaining terrorists.

In April 1957, the Parachute Regiment Squadron returned to England and the New Zealanders also left, having accounted for fifteen terrorists in their two-year tour. By then, 22 SAS was a highly trained regiment, experienced and equipped with new weapons, skills and tactics and an adaptability that would be proved time and time again in the future. For this, great credit must go to the leadership and vision of George Lea.

Major Maurice Taylor, another Lancashire Fusilier then flying as an army pilot recounts, “a nicer man you would never wish to meet and obviously a great soldier. Great was the operative word too when you picked him up in an Auster; about 250 lbs of him with a 60 lb Bergen usually with another small giant with an even bigger Bergen and their weapons......talk about scraping off the improvised airstrips we flew from back in those days!”

As a consequence of his success with 22 SAS, Lea was promoted directly to a brigade command in England in 1957. He was then competing with peers in the more favoured armoured warfare environment in Germany.

Appointment to command the 42nd Lancashire Territorial Division and North-West District in Preston, Lancashire, in 1962 appeared to limit his further employment. But he was selected in 1963 to the politically sensitive command of the armed forces of Northern Rhodesia and Nyasaland, colonies moving imminently to self-government. His political tact and decisive containment of dissident groups were judged exemplary. As this task concluded, he was chosen to succeed General Walter Walker as Director of Borneo Operations early in 1965. His successive aides-de-camp during these three command appointments were Captains John Steeds, Lawrence Stacey and Christopher Berry of XX The Lancashire Fusiliers.

Responsibility for the civil government of the former British Borneo territories had passed to Malaysia, whose authority was disputed by neighbouring Indonesia and Chinese communists in Sarawak. Lea was required to secure a mountainous border 1000 miles in length amid dense jungle, and to pacify the communist faction. He served three authorities: the British commander-in-chief in Singapore, the Malaysian government in Kuala Lumpur, and, to an extent, the Sultan of Brunei.

Lea possessed only a proportion of the powers necessary to ensure the co-operation of civil government, the Malaysian police and armed services, and the Australian and New Zealand sea, land, and air elements which reinforced his British forces from time to time. The rest depended upon goodwill, which he won by his open manner, humour, and modesty. Nothing ruffled him. Even when his wooden house caught fire and he lost in minutes the greater part of his personal possessions, he continued as if it were a matter of the least importance.

Making adroit use of air and sea resources, Lea developed the policy of pre-emptive cross-border strikes by his troops, while containing the Chinese communists with police backed by military units. The success of these methods contributed to the change of political leadership in Jakarta and the emergence of an accord between Indonesia and Malaysia in 1966.

Promoted to lieutenant general, he was posted in 1967 to Washington, DC, as head of the British Services Joint Mission, the link between the British and American Joint Chiefs of Staff. Maintaining the close alliance in a period of British economic difficulty and defence retrenchment was not easy. But the Americans opened their offices and confidences to him more fully than protocol demanded, because they liked and respected him, as the chairman of the American Joint Chiefs observed on his retirement in 1970. He had evoked similar responses throughout the greater part of his professional life.

He retired to live in Jersey and died at home in St Brelade, Jersey, on 27 December 1990. 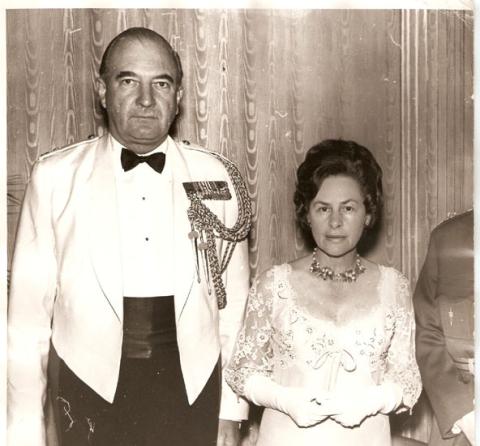