Major Francis Raymond Tate was the son of Joseph Bayliss and Clara Elizabeth Tate, and husband of Joyce Mary Tate, of Tenbury, Worcestershire. He earned a Masters qualification from Canterbury.

After he began his military service with the Royal Warwickshire Regiment, he transferred to 2nd Parachute Battalion and took part in the Battle of Arnhem, during Op Market Garden. He died on 21 September 1944, aged 39 years old. He is now buried at Oosterbeek War Cemetery, Arnhem.

If you are part of Major Tate's family and would like to complete this biography, you can apply to the curator to do so. To do this you will need to become a member of ParaData and select the 'friend or family member' option on the registration form. 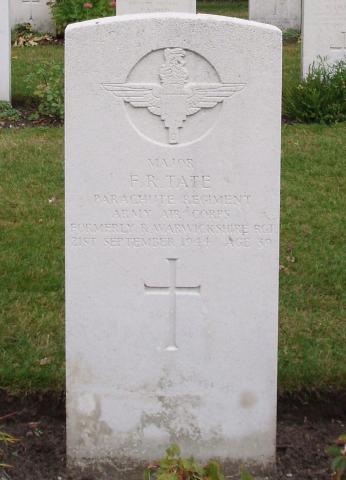