Erwin J Haley (Mick) joined up as a Junior Grenadier Guardsman, passed the Army Outward School course at Towyn and reached the rank of Junior C/Sgt during his time as a junior soldier at Pirbright in 1964/5.

On graduation he was posted to 2nd Battalion Grenadiers Guards in West Germany before passing 'P' Coy and joining No.1 (Guards) Parachute Company in 1967. He was parachute jump trained at Brize Norton on Course 678. This course ran from 8 January to 1 February 1968. His instructor noted this about Erwin's performance: "Haley was an average performer, he should improve with experience".

After jungle training in Malaya he saw operational service with No.1 (Guards) Parachute Company on the Chinese border in the New Territories, Hong Kong in 1968 when the Company was attached under command of 2 para for a six month tour to counter illegal immigration from the People's Republic of China. He also saw operational service with the Company in West Belfast, Northern Ireland in 1970 when the Company was deployed on a 5 month tour (to Townsend Street, in the old Guinness bottling factory between the Shankill and Falls Roads) again attached under the command of 2 Para.

He volunteered for service in 22 SAS (where his elder brother was already serving in B Sqn) and passed selection first time round in 1969. When, due to a lack of numbers, he and others who had passed were told they would have to mark time at Bradbury Lines for the next selection to finish before starting continuation training, he RTU'd himself so he could go to Pau and complete the French Military Free Fall course. He was told that he could return to 22 afterwards but if he left it more than a year he would have to do selection again.

After successfully completing the French course in 1970, he went on to attend and pass the Military Free Fall course at Netheravon later that same year. As a result, his application to return to 22 was out of time and so he had to do selection again in early 1971, where at the end of test week on Endurance he stopped for a rest near the top of the Fan, sat down on his bergen and died, which was where B Sqn 22 later found him. He was 22 years old. 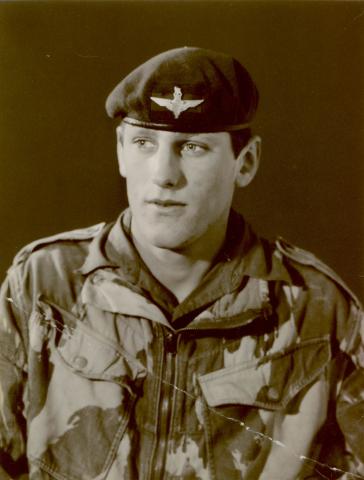