Private Ernest Walter Ager was born in Openshaw, Manchester on 21 August 1911. His parents were William Edward and Clara Ager. William was a plumber, and had served in the Rifle Brigade for six years around 1900, and joined up again in 1914, before being invalided out in 1915. At this time, the family included four children aged 9, 6, 4 and 1.

He served with 16 Platoon, C Company, 1st Battalion Border Regiment (Airborne) and took part in the Battle of Arnhem, during Op Market Garden.

Private Ager died on 22 September 1944.  The precise circumstances of his death are not known and for a long time he had no known grave. However his body was subsequently recovered from the Van Lennepweg area where the men of C Company were fighting the Germans from foxholes.

On 8 October 1993, 14 veterans of 1 Border went to Oosterbeek to act as bearers and escorts at the funeral service for Pte Ernest Ager and Pte Douglas Lowery. Their remains had been found earlier in the year where they had fallen in action. The funeral  was also attended by representatives of the King's Own Royal Border Regiment, the British Military Attache in the Hague, the Dutch Army, the Commonwealth War Graves Commission, the Netherlands Grave Service, the Mayor of Oosterbeek, staff of the Airborne Museum Hartenstein and local people.

Ernest's nephew was born two years later after his death and named after him. His widow later remarried.

Compiled with the kind assistance of Ernest Agers (Pte Agers nephew) and Stuart Eastwood of the Borders Regimental Museum. 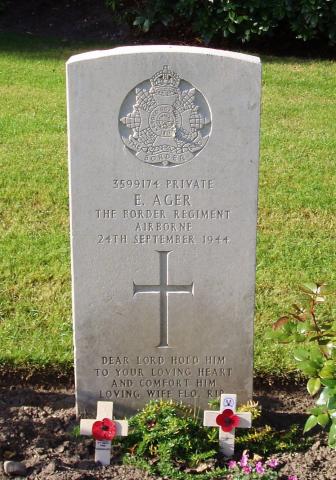