Ernest Edward Down was a career infantry officer who developed a reputation in the Second World War as one of the finest trainers of airborne troops. He was responsible for converting 11 SAS Battalion into a parachute infantry role within 1st Parachute Brigade, and went on to hold command of British and Indian Airborne Divisions.

In the words of  Major Victor Dover (ex 2nd Battalion): "Of all the British World War II Sky Generals, 'Eric' Down was probably the toughest - in every sense of that word. He was both physically and mentally tough, and possessed a sharp tongue; but behind this seemingly steel-like exterior there resided a deep affection for the men he commanded."

Born at Calstock, Cornwall, on 10 February 1902, he was educated at Plymouth College and Kelly College with aspirations to become an economist which were soon dispelled after meeting a number of them! Following a change in career choice he attended The Royal Military College, where he captained the Sandhurst Rugby XV and acquired the nickname 'Eric'.

Down was subsequently commissioned into the Dorsetshire Regiment in 1923 and after service in Malta and the Sudan, seconded for six years to the Royal West African Frontier Force. On his return to England in 1932, he transferred to the King’s Shropshire Light Infantry and, after some years of home service, including a spell of duty as Brigade Major of the 160th Brigade (Territorial Army), went with the 2nd Battalion of his Regiment to Jamaica, where he was stationed when the war broke out.

He attended the Junior War Staff College Course in 1940, before holding several staff appointments in the United Kingdom, which he openly admitted that he did not enjoy. During the Summer of 1941 he was promoted to Lt Col and given the task of converting 11 SAS Battalion into a parachute infantry role (which was later redesignated as 1st Parachute Battalion on 15 September 1941) and soon made his reputation as an outstanding trainer of airborne troops.

Before taking over his command, he felt he should make some jumps himself. He had no time to take a full parachute course, so he borrowed an instructor to tell him what to do and, within an hour or two, he had made five jumps from an aircraft, after which he proceeded to his new duties.

Prior to his arrival the battalion had been specifically trained in the tactics of a covert commando unit to operate in small modules behind enemy lines. It had developed a maverick reputation which was not well received in some quarters. An 11 SAS member, Doug Charlton, recalled "The new commanding officer was introduced to the men in the Jail Square. A tall balding man with a face like a well kept grave viewed his audience with grim conviction to say, 'Gentleman the good times are over.' This was greeted by hissing and booing which moved him not one jot." His stern countenance and determination earned him the nickname 'Dracula', however his men acquired a standard of discipline and fitness equal to the highest in the army under Down's supervision and development. As Maurice Newnham recorded, it took a long time for the men to realise that “his stern and often uncompromising manner concealed a stout heart and a generous character”.

A member of the battalion concurred: "As we got to know him our respect for him changed to extreme loyalty and affection. He was ruthless and, though sympathetic, he never showed sympathy. There was nothing that the Battalion could do that he himself could not do better. March or run, ride or shoot, 'Eric' Down was superior. He gathered about him a team of officers and men who worked for him and with him to no union hours. Though hated at first by nearly every officer and man in the Battalion, there soon came a time when all would have  gone to the end of the earth for him - not from fear, but from affection."

On 17 July 1942 he was promoted to Brigadier and given command of the 2nd Parachute Brigade, initially forming one of the brigades of the 1st Airborne Division which took part in the invasion of Sicily in 1943. The operation assigned to Brigadier Down’s 2nd Parachute Brigade was cancelled at the last moment, and, when Montgomery crossed to the mainland of Italy, it was eventually taken by sea to Taranto. A few days after the landing, the 1st Airborne Divisional Commander, Major General GF Hopkinson, was killed and Brigadier Down was promoted to Major General, appointed in his place, and was subsequently engaged for some weeks in ground operations near Foggia.

Shortly after 1st Airborne Division's arrival in the UK, in January 1944, Major General Down handed over command to Major General RE Urquhart in rather unusual circumstances - over lunch at the 'In and Out', the Naval and Military Club in Picadilly London! Urquhart later observed in an interview with Victor Dover in 1979: "It was a bit of a rush and I do not think that  'Eric' Down was best pleased on having to leave the 1st Airborne Division."

Down was then posted to India as adviser to Lord Louis Mountbatten and, at the same time, to raise and train the 44th (later 2nd) Indian Airborne Division. In his capacity as adviser, Down helped Wingate to organize the Chindit operations, but the war was over before his new division was ready for employment. On capitulation of the Japanese, many well trained teams of officers and NCOs were provided by Down, to assist in the relief of Allied prisoners of war and internees. These teams were dropped over wide areas of enemy-occupied territory, extending from Sumatra, Malaya, Java and French Indo-China to Hong Kong.

In September 1946, Down was transferred to Greece to command the 4th Infantry Division which was engaged in internal security duties around Salonika. On the disbandment of this division, six months after his arrival, he was appointed General Officer Commanding British Troops in Greece, and, a year later, Commander of the British Military Mission, a post which he held until the end of 1949. These were years of bitter fighting in the Macedonian mountains between the resuscitated Greek Army under General Papagos and the Communist invaders. The Greek commanders in the field had immense confidence in their British advisers, and in Down most of all. He would disappear for days, on foot, to visit and encourage units along the thinly held front line, and the great contribution of the British troops and the British Mission to victory was undoubtedly due in great measure to Down’s fine leadership and inspiration.

On his return to England at the end of 1949, he was given command of the Mid West District of the Western Command and of the 53rd (Welsh) Infantry Division (Territorial Army). In 1952 he was promoted Lieutenant General and served as General Officer Commanding in Chief Southern Command for three years, after which he retired from the Army to Andover, Hampshire, at the age of 53.

On 21st November 1940 No 2 Commando was officially re-designated as the 11th Special Air Service (SAS) Battalion containing a Headquarters, a Parachute Wing and a Glider Wing. 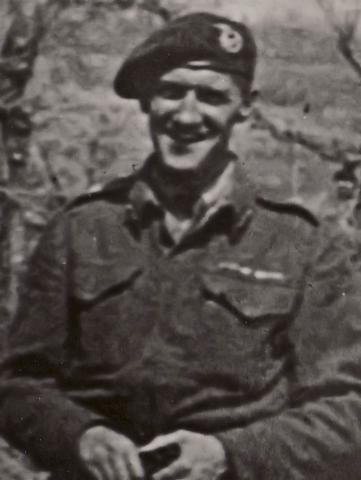 Richard Russell said:
During 1941, however, a new commander was appointed in the form of Lieutenant-Colonel Eric Down, who was to become one of the most respected British airborne leaders of the war. One of the battalions' paratroopers, Doug Russell, recalls his arriVal.
"There was very little discipline in those days, I have to say, very little real discipline... Obviously you had to go on parade and you had to do as you were told, but I really think we were very slack. He [Eric Down]stood up on the stage, and everybody booed, including all the officers, senior officers as well. He told us that we were only profiteering, getting two shillings a day for parachuting, and he would stop that and he would see that we were going to war by parachute, or lorry or bus or walking it didn't make any difference... Well we didn't like that very much at all, being told this of course, but he was quite right."
Add your comment