He saw service in North Africa, Sicily, Italy and Arnhem, where he was wounded and taken prisoner.

By 1944 he was a Section Sergeant in No 1 Platoon (commanded by Lt. Robin Vlasto), A Company 2nd Parachute Battalion. He had originally enlisted into the Royal Army Service Corps.

On Sunday, 17 September 1944, he parachuted onto DZ ‘X’, near Renkum in Holland as part of Operation ‘MARKET’.

On the march from Oosterbeek toward Arnhem, just after crossing under the rail line , near the Oosterbeek-Laag train station, the platoon came under fire from a German armoured car. l Platoon had taken the lead from 2 Platoon, after a skirmish in Heelsum. The 20 mm fire took the column by surprise and before the men could scatter, Sergeant Ballinger was hit in the hand, shattering it. This sudden attack by the armoured car also killed Private Thomas Gibson.

“Go under the railway; the leading section has just [got] round the bend beyond the bridge, when an ‘Arc’ (Armoured Car) comes round the corner and takes us completely by surprise. Plays hell with its 20mm and MG. Two men go down straight away on either side of me, which certainly brings us down to earth with a jolt. Sgt Ballinger goes back with his hand smashed up, Pte Gibson and PIAT killed.” [1]

Sergeant Ballinger made his way back to a medical aid post set up in the house on the corner of the Benedendorpsweg and Stenenkruis. On 18 September he was taken to the St Elizabeth’s Hospital, where he was eventually captured. He was transported from the St Elizabeth’s Hospital to the temporary ‘Airborne’ Hospital in the Willem III Barracks at Apeldoorn. He left there with other walking wounded on 26 September 1944. 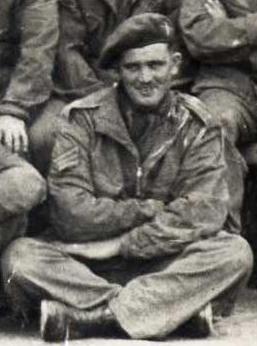