Eric George Woodman was born in Kent and educated locally. He was granted an emergency commission with The Queen’s Own Royal West Kents in April 1941, after some 20 months service in the ranks.

He subsequently volunteered for airborne forces in 1943 and attended parachute course 67 which ran at RAF Ringway from 27 May to 8th June.

Eric Woodman fought with the 7th (Light Infantry) Parachute Battalion in the campaigns to liberate North West Europe, from Normandy through to the final mass allied parachute and glider assault of World War II, Operation Varsity, on 24 March 1945, and the subsequent advance to the Baltic; latterly as B Coy’s 2ic.

He ordered his men to charge and Eric Woodman led the two advance platoons under Lt Gush (5 Pl) and Sgt McIvor (4 Pl), kicking the fuses off some of the explosives on the bridge as he went. Unfortunately, the first arch of the main bridge was blown behind them at approximately 0015 hrs 8 April resulting in heavy and severe casualties amongst the troops on both sides of the explosion. The small party that got across completely routed the garrison, led by Woodman, and held their small bridgehead all night. In the morning, men from A Coy traversed the river in boats to relieve the men who had made it across the bridge.

Woodman was granted a Military Cross (see citation) in 1946 for his actions at Neustadt, and others, and in 1946 was granted a regular commission. He went onto command B Coy, 7th Para Bn, in Palestine before returning to his parent regiment.

He was briefly Adjutant of 17th Battalion (TA) from 1950-1951, a posting which was cut short by attendance at the Staff College.

Woodman went onto command 1st Bn The Queen's Royal Surrey Regiment from 1963 to 1965 and this was followed by a posting to Washington.

He held various staff appointments after his appointment to Colonel in 1967 and finally retired from the Army in 1975.

For outstanding leadership and gallantry in action from 6th June 1944 to 8th May 1945. 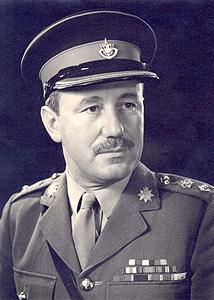