Edward Gardener was born in Kent on 21 June 1938. He was educated at the King’s School Canterbury and was called up for National Service in The Buffs in 1958. After commissioning in 1959 he was seconded to The Parachute Regiment and transferred to the regular cadre on obtaining a regular commission.

He served in 3 PARA as a Rifle and Mortar Platoon Commander in the UK and the Middle East until 1962 when he was posted to the Infantry Junior Leaders Battalion at Oswestry as an Adventure Training Instructor.

In 1964 he raised and commanded The Parachute Regiment Free Fall Team (later called the Red Devils) for a year before returning to 3 PARA as Adjutant in the Middle East, UK and British Guiana. In 1967 he was posted to the USA as an Exchange Officer and served with both the 101 and 82 US Airborne Divisions. On his return to the UK in 1969 he was posted to 1 PARA and commanded the Patrol Company for eighteen months, which included the Battalion’s first emergency tour in Northern Ireland.

After attending the Staff College at Camberley in 1971 he became GSO2 (Air), HQ 16 Para Bde for two years and was closely involved in the operational planning for the UK Joint Airborne Task Force. In 1974 he returned again to 3 PARA as a Rifle Company Commander and later as Second in Command, completing two further roulement tours in Northern Ireland.

He then attended the National Defence College at Latimer. After a year on the staff of HQ 1 (BR) Corps in Germany as DAQMG (Ops) he went to the British Army Advisory Team in Nigeria for two years, initially as a Directing Staff at the Senior Staff College and later as Chief Instructor of the Junior Division. This tour was slightly curtailed by a parachuting accident in 1980.

On his recovery he was posted to Scotland where he commanded 15 PARA (SV) for nearly three years, during which time the Battalion received New Colours from the Colonel in Chief, HRH The Prince of Wales. After a six month attachment to the Permanent Planning Group of the Joint Force Headquarters, he took over as Regimental Colonel of The Parachute Regiment in October 1984 for four years.

In December 1988 he was appointed Defence and Military Attaché, Cairo until his retirement from the Army in 1993. He then worked for ten years as a school bursar in Bristol.

He is married with one daughter and four grandchildren; his son was killed in a skiing accident in 2005. His main interests are gliding and preservation projects for railways, aircraft and ships. 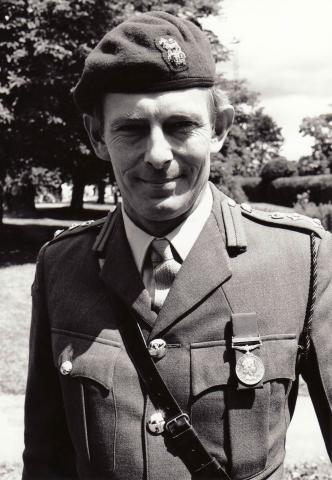