Douglas Edward James, son of William and Margaret James, of Cilfynydd, Glamorgan, enlisted into the Royal Warwickshire Regiment and later volunteered for The Parachute Regiment in 1943.

Private James qualified as a military parachutist on course 71 which ran at RAF Ringway in July 1943. He was initially sent to the Holding Company and later posted to the 6th (Royal Welch) Parachute Battalion.

He served in Italy and later jumped into Southern France on Operation Dragoon in August 1944.

Pte James went on Operation Manna in Greece. He was Killed in Action on 13 December 1944, aged 21 years old and is now buried in Phaleron War Cemetery, Greece. 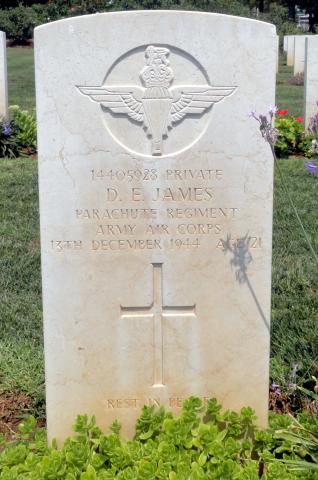