Donald Murray Fletcher was awarded the Military Cross for bravery in Burma during World War II, and the citation noted:

"Since 15 Feb 45 Lt DM Fletcher has been continuously in action in the Me Chaung valley with his troop, which during a number of engagements has inflicted many casualties on the enemy.
His courage, leadership and outstanding personality in many actions have been beyond praise.
The example he has given to his men has been an inspiration to all from the beginning of the campaign and he has kept his troops morale at a consistently high level through long periods of physical strain and through successive attacks by the enemy.
On 27 February 1945 two Squadrons of 82 (WA) Div Recce Regt were detailed to capture Me Chaung village at the junction of the Me and Dalet Chaungs. During the engagement two troops came under heavy rifle and LMG fire from a Japanese bunker position on a pimple commanding the village. One African Bren gunner was immediately killed and one officer and four Africans wounded.
Lt DM Fletcher, who was then acting 2i/c of one of the Squadrons concerned, at once and without regard to his own safety ran forward through the enemy fire and carried back a wounded African who could not walk. He repeated this and brought in a second wounded African. Lt DM Fletcher had to be ordered back from a third attempt when fire became too heavy."

He went onto serve in The Parachute Regiment, both in the Territorials and Regulars, and rose to senior rank as Brigadier, serving as Defence Attaché in Seoul (1974-5), prior to retirement from the Army in 1977.

His sons Hamish and Hugo both served in The Parachute Regiment. The former commanded 3 PARA and the latter 4 PARA.

Brigadier Donald Fletcher, who has died aged 87, was awarded a Military Cross in Burma in 1945 for rescuing wounded comrades under fire. 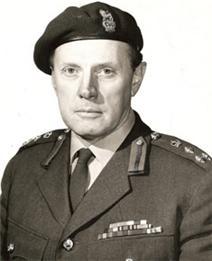 Bruce Cropper said:
In the mid 1960s, when I was a recent graduate of Nottingham University and also a newly commissioned (TA) officer, I was honoured to join 16 Indep Coy at Lincoln. Don Fletcher then Major was the company commander. What I remember was that he was an outstandingly kindly man, who took me under his wing and appeared to take a genuine interest in me - not in my experience the stereotypical army officer of that era. He had an enormous but not intimidating presence, and commanded the unit with his personality rather than his rank. Sadly, his 3 year posting soon came to an end, but more than half a century later, I still have strong - and fond - memories of this remarkable man. I knew he had an M.C., but was until encountering this site unaware of how he had earned it.
Add your comment