Desmond Spencer Gordon was educated at Haileybury and RMS Sandhurst.

He was commissioned into The Green Howards in January 1932 and served with that Regiment in India and in Norway in 1940. The same year he married Sybil Thompson. They went on to have a son and a daughter.

Maj Gen Gordon then held some staff appointments before being appointed to command 1/7th Bn, The Queen's Royal regiment in April 1943.

In July 1944 he was promoted to command 151st Infantry Brigade of 50th Division. For his actions in the Battle of Tunis, which resulted in the taking 4000 German prisoners he was awarded the DSO and got MID.

From 1962 to 1964 he was Chief Army Instructor at Imperial Defence College and in August 1964 was appointed Assistant Chief of Defence Staff (General) MOD.

He was made a CBE 1952 and CB in 1961. Before he retired in 1966 he was appointed Knight Commander of the Orange Nassau with Swords.

Maj Gen Gordon was Commander in Chief of the St John Ambulance Brigade between 1973 and 1978.

Information for this profile has been researched from the web pages of the museums of The Green Howards, The Yorkshire Regiment and The Queen's Royal Surrey Regiment. 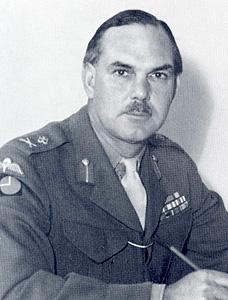