Desmond Robert Gammon was born on the 17 May 1924 in Cardiff, Wales. He originally enlisted as a boy soldier at Chepstow, Monmouthshire in 1938 and was always known as ‘Curly’.

In 1942 he volunteered for airborne forces and after successfully completing the selection course at Hardwick Hall, he was sent to RAF Ringway on parachute course No 28. This ran from 21 to 28 September 1942. He successfully completed the 7 jump course and was duly allotted as a re-enforcement to the 1st Parachute Brigade when it was discovered that he was under-age.

It was with this Squadron that ‘Curly’ attended parachute course No 82, at RAF. Ringway, 13 to 23 September 1943, and passed after completing the 8 jump course. His instructors’ comments: ‘Well above average, a good leader.’

‘Curly’ was assigned to 3 Troop for the coming invasion of Normandy, France.

“I was a member of 9 Stick (having been moved from 10 stick a few weeks before, because the stick commander Lt P.G.L.Mitchley wanted to be the youngest in his section and asked me to move to another stick!) and jumped from a Stirling onto D.Z. ‘N’ at about 00.45 hours on the 6th June 1944. On lowering my kit-bag the rope broke away from me. After touching down I went to recover my kit and found that my rifle butt had been snapped off. Looking round I saw another parachutist descending with tracer fire from a machine-gun severing his rigging lines. I ran over to him and on a quick check thought he was dead, he was a Lance Corporal in the Postal Section, Royal Engineers, so I took his rifle from his kit-bag. I then moved off to my R.V. at Ranville Church.

2. Recovering equipment from containers and gliders.

1. After all the months of practice it was found that the poles could be mostly pushed over or lifted out of their holes. Only a few needed blowing up.

2. We were trying hard to extract a jeep and 6 pounder anti-tank gun from a Horsa glider and I cursed the absence of a driver, when a casualty next to the glider piped up that he was the driver!

Later when 3 Troop were clearing the D.Z. for the glider landings I came across the same man propped up and wrapped in his parachute. He said that the P.F.A. medics had swept the D.Z. treating people and would be back for him later, but some bastard had nicked his rifle whilst he was concussed!” [1]

‘Curly’ served throughout the Normandy campaign and returned to the UK in September 1944. He also took part in the Ardennes campaign (December 1944 – January 1945), the holding of the River Maas line (January – February 1945) and the Rhine Crossing (Operation Varsity, 24 March 1945) and then the pursuit across Germany to the Baltic (April – May 1945).

Upon retirement ‘Curly’ settled in Norton on Teeside and regularly attended the Parachute Regiment Association meetings and took part in the pilgrimages to Normandy.

‘Curly’ Gammon died on the 17 June 1998 and is buried at Cowpen Bewley Cemetery, Billingham, Teeside. 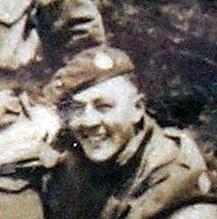