David King was born in 1923 and enlisted in Gloucester in April 1943. After basic training he was posted to 35 Signal Training Regiment Royal Artillery (RA).

After Normandy Gnr King was posted to 2 (Airborne) Forward Observation Unit, Royal Artillery (2 FOU) and saw active service in the Ardennes, and on Op Varsity (the Rhine Crossing).

In July 1945, 2 FOU went to Bombay to undertake jungle training in preparation for proposed landings on the Malay Peninsular. Later 2 FOU deployed to Singapore, and took over a police school.

L/Bombardier King then travelled to Java in early December 1945. On 24 March 1946, 5 Parachute Brigade marched through Semarang to commemorate the first anniversary of the Rhine Crossing.

He returned to Singapore in July 1946 and was told to prepare for Palestine. In Palestine he was posted back as a signaller in 53 (Worcestershire Yeomanry) Airlanding Light Regt RA, this time with 211 Battery.

L/Bombardier King was demobbed on 5 November 1946.

David King had a long career as a gardener. He was married to Brenda for 53 years and they had two daughters and four grandchildren. He now lives in Oxfordshire. 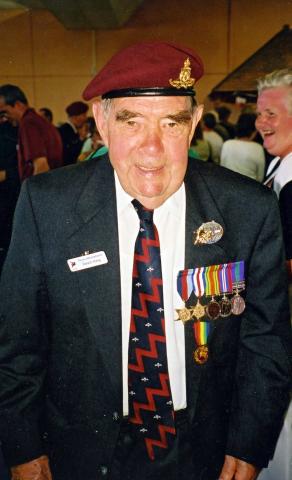