Daniel Gamble grew up in Uckfield, East Sussex, In October 2006, he joined 2 PARA having gained his parachute ‘wings’.

Having been found to have an aptitude for learning foreign languages, he was selected to attend a 40 week full time language course to learn Pashto. On returning to his Battalion he showed his confidence by delivering a presentation to 300 soldiers on Pashto culture.

In March 2008 he was deployed to Southern Afghanistan on Operation Herrick VII as a rifleman and Pashto Linguist. At approximately 1100 hours local time, 8 June 2008, Pte ‘Dan’ Gamble was on a routine foot patrol 1km west of their Forward Operating Base in the Upper Sangin Valley when their patrol suffered a suicide explosive device which killed him and two of his colleagues, Pte Nathan Cuthbertson and Pte David Murray.

Pte Gamble was the 100th soldier to die in Afghanistan. He was 22 years old.

His funeral service was held at Holy Cross Church, Uckfield.

"Private Gamble was an incredibly talented individual and had completed a very demanding Pashto language course before the deployment. As a linguist he was instrumental to the Company's ability to communicate with the locals. It was in this role that he had gone forward to communicate with a local national and was tragically killed by a suicide bomber."

"A professional, intelligent individual he had added huge value to the Company mission in Afghanistan. His loss will be sorely felt by his friends and colleagues. Our thoughts and prayers are with his family and friends." 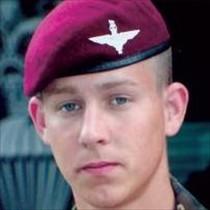 Paul Gamble said:
I am hugely proud of what you achieved in your all-too-short life, Daniel. You joined the Paras because you wanted to be part of an elite force. Having completed a 40 week Pashtu course before deploying to Afghanistan, you had become elite within the elite. You were at the front of every dangerous patrol in Sangin, Helmand but you took it in your stride. I will miss you forever, Dad x
Add your comment