Captain D Alex Allender served with the Scot Guards rising through the ranks, reaching WO1 before earning a commission. He began his Guards career in 1964, serving for four years with 2nd Scots Guards, including overseas deployment to Canada and Germany as part of the British Army of the Rhine (BAOR). He was also attached to 1st Irish Guards for a year from 1966, serving in Aden.

He transferred to No 1 (Guards) Independent Parachute Company in 1968. Over a seven year career with the Coy he took part in multiple overseas deployments to the BAOR, Denmark, Cyprus, Kenya, Gibraltar, France, Italy, the Mid and Far East and tours of Northern Ireland (for which he gained the GSM).

After returning to his parent regiment, he returned to the BAOR, and later took part in the Falklands War in 1982. Further tours to Cyprus and Northern Ireland followed in the 1980s and early 1990s, before he left the Army in 1993. 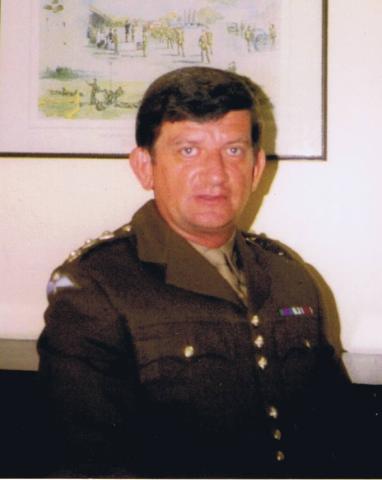